This guide was created to commemorate the 20th anniversary of the terrorist attacks on the United States on September 11, 2001. It provides both print and online resources for those interested in learning more about this event. 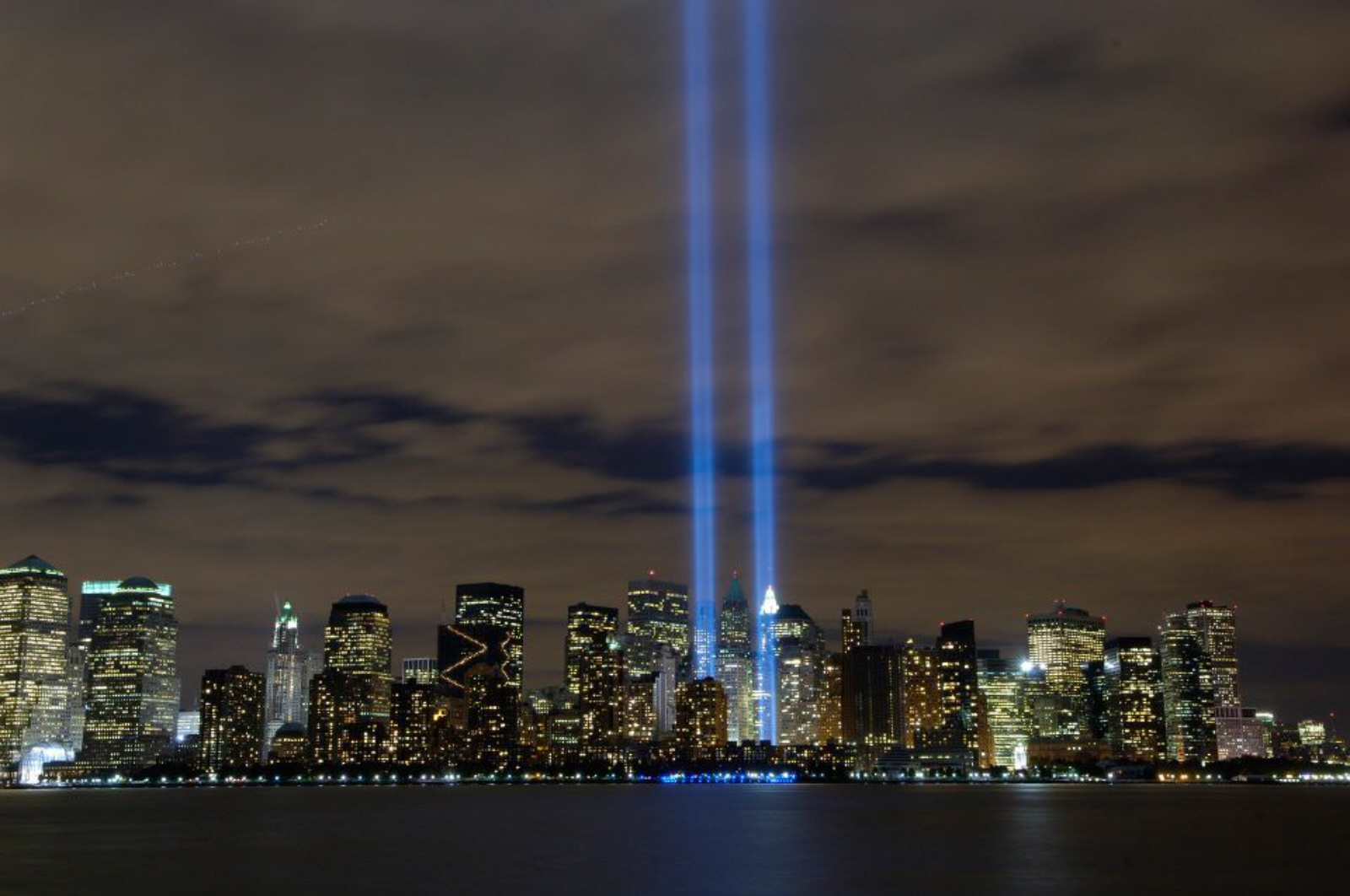 Tribute in Light is a commemorative public art installation first presented six months after 9/11 and then every year thereafter, from dusk to dawn, on the night of September 11. It has become an iconic symbol that both honors those killed and celebrates the unbreakable spirit of New York.

On September 11, 2001, nineteen terrorists associated with al-Qaeda, an Islamist extremist group, hijacked four commercial airplanes scheduled to fly from the East Coast to California. In a coordinated attack that turned the planes into weapons, the terrorists intentionally flew two of the planes into the Twin Towers of the World Trade Center, a global business complex in New York City, causing the towers to collapse. They also flew a third plane into the Pentagon, the headquarters of the U.S. Department of Defense, in Arlington, Virginia. Passengers and crew members on the fourth plane launched a counterattack, forcing the hijacker pilot—who was flying the airplane toward Washington, D.C.—to crash the plane into a field in Somerset County, Pennsylvania, near the town of Shanksville.

The 9/11 attacks killed 2,977 people. This was the single largest loss of life resulting from a foreign attack on American soil. The attacks caused the deaths of 441 first responders, the greatest loss of emergency responders on a single day in American history.

On September 11, 2001, at 8:45 a.m. on a clear Tuesday morning, an American Airlines Boeing 767 loaded with 20,000 gallons of jet fuel crashed into the north tower of the World Trade Center in New York City.

The impact left a gaping, burning hole near the 80th floor of the 110-story skyscraper, instantly killing hundreds of people and trapping hundreds more in higher floors.

As the evacuation of the tower and its twin got underway, television cameras broadcasted live images of what initially appeared to be a freak accident. Then, 18 minutes after the first plane hit, a second Boeing 767—United Airlines Flight 175—appeared out of the sky, turned sharply toward the World Trade Center and sliced into the south tower near the 60th floor.

The collision caused a massive explosion that showered burning debris over surrounding buildings and onto the streets below. It immediately became clear that America was under attack.

The hijackers were Islamic terrorists from Saudi Arabia and several other Arab nations. Reportedly financed by the al Qaeda terrorist organization of Saudi fugitive Osama bin Laden, they were allegedly acting in retaliation for America’s support of Israel, its involvement in the Persian Gulf War and its continued military presence in the Middle East.

Some of the terrorists had lived in the United States for more than a year and had taken flying lessons at American commercial flight schools. Others had slipped into the country in the months before September 11 and acted as the “muscle” in the operation.

The 19 terrorists easily smuggled box-cutters and knives through security at three East Coast airports and boarded four early-morning flights bound for California, chosen because the planes were loaded with fuel for the long transcontinental journey. Soon after takeoff, the terrorists commandeered the four planes and took the controls, transforming ordinary passenger jets into guided missiles.

At 9:59 a.m. the horror in New York took a catastrophic turn when the south tower of the World Trade Center collapsed in a massive cloud of dust and smoke.

The structural steel of the skyscraper, built to withstand winds in excess of 200 miles per hour and a large conventional fire, could not withstand the tremendous heat generated by the burning jet fuel.

At 10:30 a.m., the north building of the twin towers collapsed. Only six people in the World Trade Center towers at the time of their collapse survived. Almost 10,000 others were treated for injuries, many severe.

As millions watched the events unfolding in New York, American Airlines Flight 77 circled over downtown Washington, D.C. before crashing into the west side of the Pentagon military headquarters at 9:45 a.m. The hijackers of the plane that hit the Pentagon flew the aircraft into the western façade of the Pentagon. The impact punched a hole through layers of limestone, brick, concrete, blast-resistant geotextiles, and reinforced steel columns. Flames burst through the roof and reached twice the size of the five-story target.

Jet fuel from the Boeing 757 caused a devastating inferno that led to the structural collapse of a portion of the giant concrete building, which is the headquarters of the U.S. Department of Defense.

The attack on the Pentagon killed all 64 people on board the aircraft and 125 people inside the Pentagon.

A fourth California-bound plane—United Flight 93—was hijacked about 40 minutes after leaving Newark Liberty International Airport in New Jersey. Because the plane had been delayed in taking off, passengers on board learned of events in New York and Washington via cell phone and Airfone calls to the ground.

After learning of the attacks that had already taken place and knowing that the aircraft was not returning to an airport as the hijackers claimed, many of the passengers attempted to retake the plane from the hijackers.

The passengers fought the four hijackers and are suspected to have attacked the cockpit with a fire extinguisher. The plane then flipped over and sped toward the ground at upwards of 500 miles per hour, crashing in a rural field near Shanksville in western Pennsylvania at 10:10 a.m.

All 44 people aboard were killed. Its intended target is not known, but theories include the White House, the U.S. Capitol, the Camp David presidential retreat in Maryland or one of several nuclear power plants along the eastern seaboard.

On the day following the attacks, 11 people were rescued from the rubble, including six firefighters and three police officers.  One woman was rescued from the rubble near where a West Side Highway pedestrian bridge had been. Two PAPD officers, John McLoughlin and Will Jimeno, were also rescued. Discovered by former U.S. Marines, Jason Thomas and Dave Karnes, McLoughlin and Jimeno were pulled out alive after spending nearly 24 hours beneath 30 feet of rubble

Port Authority secretary, Genelle Guzman-McMillan, was the last person to be pulled alive from the World Trade Center rubble, 27 hours after the collapse of the North Tower.

Rescue efforts were paused numerous times in the days after the attack, due to concerns that nearby buildings were in danger of collapsing

There were also about 400 working dogs, the largest deployment of dogs in the nation's history.

"The Pile" was the term coined by the rescue workers to describe the 1.8 million tons of wreckage left from the collapse of the World Trade Center. They avoided the use of "ground zero", which describes the epicenter of a bomb explosion.

Numerous volunteers organized to form "bucket brigades", which passed 5-gallon buckets full of debris down a line to investigators, who sifted through the debris in search of evidence and human remains. Ironworkers helped cut up steel beams into more manageable sizes for removal. Much of the debris was hauled off to the Fresh Kills Landfill on Staten Island where it was further searched and sorted. According to the New York Times, by September 24, 2001, more than 100,000 tons of debris had been removed from the site.

Some of the steel was reused for memorials. New York City firefighters donated a cross made of steel from the World Trade Center to the Shanksville Volunteer Fire Company in Shanksville, Pennsylvania.The beam, mounted atop a platform shaped like the Pentagon, was erected outside the Shankville's firehouse near the crash site of United Airlines Flight 93.

Twenty-four tons of the steel used in construction of USS New York (LPD-21) came from the small amount of rubble from the World Trade Center preserved for posterity.

The dust from the collapsed towers held a mixture of toxins and irritants that included asbestos, polychlorinated biphenyls (PCBs), benzene, dioxin, glass fibers, gypsum, cement particles, and heavy metals such as lead, among other substances. That dust, which remained in the air for days, covered everything and everyone in the area.

The enormous mass of debris from the fallen towers, referred to as the Pile, continued to smolder until mid-December, heating and combining the toxins. These toxic exposures have led to debilitating illnesses among rescue, recovery, and cleanup workers, the most common conditions certified by the World Trade Center Health Program were rhinosinusitis, gastroesophageal reflux disease (GERD), asthma, sleep apnea, cancer, posttraumatic stress disorder, respiratory disease, chronic obstructive pulmonary disease, depression, and anxiety disorder. The most common cancers were skin cancer and prostate cancer, although workers have also shown elevated rates of multiple myeloma, thyroid cancer and leukemia.

In January 2011, the *James Zadroga 9/11 Health and Compensation Act of 2010 was signed into law. This created the World Trade Center Health Program that provides care for nearly 75,000 responders, survivors and residents for a list of conditions directly linked to 9/11. So far, that list has more than 90 health conditions.

*James Zadroga was a New York City policeman who died at age 34 from a respiratory disease caused by direct contact with the toxins caused by the 9/11 terrorist attacks in New York City.