This guide provides suggested resources for beginning research on and discussing the issues related to the topic of homelessness. 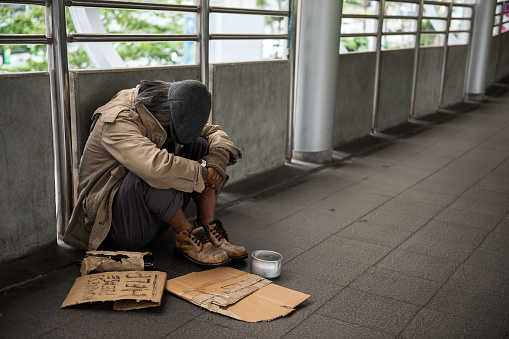 Definition of homelessness as defined by the U.S. Department of Housing and Urban Development:

The individual or family lacks a fixed, regular and adequate nighttime residence, meaning:

Homelessness is one of our nation’s most misunderstood and vexing social problems. Homelessness does not discriminate. Families with children, single adults, teenagers and older individuals of all races struggle with the devastating effects of homelessness.

The primary cause of homelessness is a lack of affordable housing. Over five million low-income households have serious housing problems due to high housing costs, substandard housing conditions or both. While the problem of homelessness seems daunting, we can end homelessness in our nation.

The Bassuk Center on Homeless and Vulnerable Children & Youth

When Housing is Out of Reach.  More than at any other time, there is a lack of housing that low income people can afford. Without housing options, people face eviction, instability and homelessness. As the gap between increasing housing costs and stagnant incomes widens, the end result is that more people become homeless.

Income and Housing Affordability. Low income households often do not earn enough to pay for food, clothing, transportation and a place they can call home. Low-income households are typically unemployed or underemployed due to a number of factors, such as a challenging labor market; limited education; a gap in work history; a criminal record; unreliable transportation or unstable housing; poor health or a disability.

For those who are low-income but employed, wages have been stagnant and have not kept pace with expensive housing costs. The typical American worker has seen little to no growth in his/her weekly wages over the past three decades. Too little income combined with the dwindling availability of low-cost housing leaves many people at risk for becoming homeless.

Connecting Homelessness and Health. Health and homelessness are inextricably linked. Health problems can cause a person’s homelessness as well as be exacerbated by the experience. Housing is key to addressing the health needs of people experiencing homelessness. An acute physical or behavioral health crisis or any long-term disabling condition may lead to homelessness; homelessness itself can exacerbate chronic medical conditions. A person can become chronically homeless when his or her health condition becomes disabling and stable housing is too difficult to maintain without help.

Impact of Racial Disparities. Most minority groups in the United States experience homelessness at higher rates than whites, and therefore make up a disproportionate share of the homeless population. The most striking disparity can be found among African Americans, who represent 13 percent of the general population but account for 40 percent of people experiencing homelessness and more than 50 percent of homeless families with children. This imbalance has not improved over time.

According to a 2015 assessment by the U.S. Department of Housing and Urban Development, 564,708 people were homeless on a given night in the United States. At a minimum, 140,000 or 25 percent of these people were seriously mentally ill, and 250,000 or 45 percent had any mental illness.

Affective disorders such as depression and bipolar disorder, schizophrenia, anxiety disorders and substance abuse disorders are among the most common types of mental illness in the homeless population.

Several studies have shown, however, that individuals with mental illnesses often find themselves homeless primarily as the result of poverty and a lack of low-income housing. The combination of mental illness and homelessness also can lead to other factors such as increased levels of alcohol and drug abuse and violent victimization that reinforce the connection between health and homelessness.

Programs that provide long-term (a year or longer) stable housing for people with mental illnesses can help to improve mental health outcomes, including reducing the number of visits to inpatient psychiatric hospitals. A 2015 study concluded that services that deliver cognitive and social skill training, particularly in developing and maintaining relationships, would be useful in helping people with mental illnesses and homelessness regain housing.

Some of the common health problems that homeless people may have include:

Many homeless people are dealing with trauma. They may have been abused or assaulted. This includes homeless children, who are at risk for emotional and behavioral problems.

The Department of Housing and Urban Development (HUD) estimates that 40,056 veterans are homeless on any given night. Approximately 12,700 veterans of Operation Enduring Freedom (OEF), Operation Iraqi Freedom (OIF) and Operation New Dawn (OND) were homeless in 2010. The number of young homeless veterans is increasing, but only constitutes 8.8% of the overall homeless veteran population.

The nation’s homeless veterans are predominantly male, with roughly 9% being female. The majority are single; live in urban areas; and suffer from mental illness, alcohol and/or substance abuse, or co-occurring disorders. About 11% of the adult homeless population are veterans.

Roughly 45% of all homeless veterans are African American or Hispanic, despite only accounting for 10.4% and 3.4% of the U.S. veteran population, respectively.

About 1.4 million other veterans, meanwhile, are considered at risk of homelessness due to poverty, lack of support networks, and dismal living conditions in overcrowded or substandard housing.

What services do veterans need?

NCHV strongly believes that all programs to assist homeless veterans must focus on helping them obtain and sustain employment.

Homelessness impacts all of us, whether or not we experience it ourselves. It’s a public health problem. Homelessness isn’t someone else’s issue. It has a ripple effect throughout the community. It impacts the availability of healthcare resources, crime and safety, the workforce, and the use of tax dollars. Not having a home can make it harder for individuals to find a job, stay healthy and maintain relationships.

Without their own housing and the social status to use restrooms in businesses or other public places, people who are homeless often have to relieve themselves outside. They lack access to health care and often have chronic illnesses, made worse by tough living conditions: sleeping outside in all weather, eating cheap starchy foods, and being in close quarters at social service agencies with other unhealthy people.

Homelessness is an economic problem. People without housing are high consumers of public resources and generate expense, rather than income, for the community. In our tourism-driven economy, homelessness is bad for business and can be a deterrent to downtown visitors. Addressing the immediate and long-term costs of homelessness can be significant. Putting in place services which prevent homelessness in the first place, and which help people quickly if they find themselves needing support, can help stop these costs escalating.

Most importantly, homelessness is a human tragedy. Our own community members live in tents and under bridges, vulnerable to inclement weather and violence, stripped of dignity and our collective respect.

People who are homeless are just as varied as people who are not; the only commonality among them is a profound lack of support. Sometimes they’ve come from a background of family support and have lost it because mental illness and substance abuse damaged their relationships. More often, they never had that support to begin with.

Our greatest misconception about homelessness is that the people who experience it somehow deserve it, should be defined by it, and are less valuable because of it. In reality, homeless people are more often victims of trauma, are defined by who they are rather than by their housing status, and are equally as human and equally as valuable as those of us who have homes of our own. It is possible for us to end homelessness, but the first step must be a fundamental recognition of the humanity we all share, regardless of where we sleep each night.