This guide provides information on smoking, secondhand smoke, and electric cigarettes. It is to be used as a starting point for research on these topics. 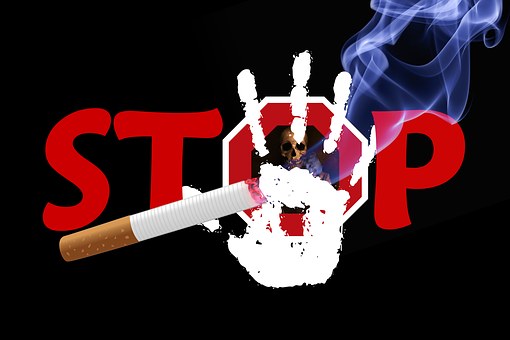 Tobacco smoking is the practice of smoking tobacco and inhaling tobacco smoke (consisting of particle and gaseous phases). (A more broad definition may include simply taking tobacco smoke into the mouth, and then releasing it, as is done by some with tobacco pipes and cigars.) The practice is believed to have begun as early as 5000–3000 BC in Mesoamerica and South America. Tobacco was introduced to Eurasia in the late 17th century by European colonists, where it followed common trade routes. The practice encountered criticism from its first import into the Western world onwards but embedded itself in certain strata of a number of societies before becoming widespread upon the introduction of automated cigarette-rolling apparatus.

German scientists identified a link between smoking and lung cancer in the late 1920s, leading to the first anti-smoking campaign in modern history, albeit one truncated by the collapse of Nazi Germany at the end of World War II. In 1950, British researchers demonstrated a clear relationship between smoking and cancer. Evidence continued to mount in the 1980s, which prompted political action against the practice. Rates of consumption since 1965 in the developed world have either peaked or declined. However, they continue to climb in the developing world.

Smoking is the most common method of consuming tobacco, and tobacco is the most common substance smoked. The agricultural product is often mixed with additives and then combusted. The resulting smoke is then inhaled and the active substances absorbed through the alveoli in the lungs or the oral mucosa. Combustion was traditionally enhanced by addition of potassium or nitrates. Many substances in cigarette smoke trigger chemical reactions in nerve endings, which heighten heart rate, alertness and reaction time, among other things. Dopamine and endorphins are released, which are often associated with pleasure. As of 2008 to 2010, tobacco is used by about 49% of men and 11% of women aged 15 or older in fourteen low-income and middle-income countries (Bangladesh, Brazil, China, Egypt, India, Mexico, Philippines, Poland, Russia, Thailand, Turkey, Ukraine, Uruguay and Vietnam), with about 80% of this usage in the form of smoking. The gender gap tends to be less pronounced in lower age groups.

Many smokers begin during adolescence or early adulthood. During the early stages, a combination of perceived pleasure acting as positive reinforcement and desire to respond to social peer pressure may offset the unpleasant symptoms of initial use, which typically include nausea and coughing. After an individual has smoked for some years, the avoidance of withdrawal symptoms and negative reinforcement become the key motivations to continue.

A study of first smoking experiences of seventh-grade students found out that the most common factor leading students to smoke is cigarette advertisements. Smoking by parents, siblings and friends also encourages students to smoke.

Passive smoking is the inhalation of smoke, called second-hand smoke (SHS), or environmental tobacco smoke (ETS), by persons other than the intended "active" smoker. It occurs when tobacco smoke permeates any environment, causing its inhalation by people within that environment. Exposure to second-hand tobacco smoke causes disease, disability, and death. The health risks of second-hand smoke are a matter of scientific consensus. These risks have been a major motivation for smoke-free laws in workplaces and indoor public places, including restaurants, bars and night clubs, as well as some open public spaces.

Information obtained from Wikipedia and the CDC

An e-cig is essentially an electronic cigarette that is battery powered which people use to inhale aerosol which can contain nicotine, flavorings, and other chemicals. There are many different designs that e-cigs can come in, some resembling an ordinary cigarette and some that look like a usb drive. Electronic cigarettes have four different parts that work together to release the aerosol that humans then inhale. There is a heating device, a power source (battery), a mouthpiece, and a cartridge that holds the liquid which can contain nicotine or just flavoring and other chemicals. When the mouthpiece is puffed on it activates the heating device which then vaporizes the liquid in the cartridge and turns it into the aerosol that is inhaled. Some research suggests that electronic cigarette use is less harmful than tobacco smoking and can assist people in quitting. Electronic cigarette use is definitely on the rise in the United States, surprisingly it is very popular among today's youth starting as early as middle school because the e-cigarettes are so accessible, their appearance, the various flavorings, and the 'head high' they are said to give. Although people may see some positive aspects to electronic cigarettes, nicotine is a highly addictive substance no matter how it is used and there are still very harmful chemicals that are released from the e-cig that you then inhale.