This guide provides sources to learn more about the use of illegal substances in competitive sports to improve performance and their side effects. 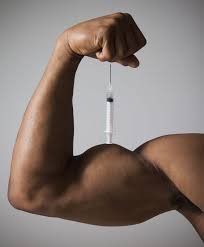 In competitive sports, doping is the use of banned athletic performance-enhancing drugs (PEDs) by athletic competitors.

Blood doping is an illicit method of improving athletic performance by artificially boosting the blood's ability to bring more oxygen to the muscles.

Gene doping is the transfer of genes or genetically modified cells into an individual as a potential method for illicitly enhancing athletic performance.

There are five classes of banned drugs, the most common of which are stimulants and hormones. There are health risks involved in taking them and they are banned by sports' governing bodies.Substances and methods are banned when they meet at least two of the three following criteria: they enhance performance, pose a threat to an athlete's health, or violate the spirit of sport.

The most commonly used substances are androgenic agents such as anabolic steroids. These allow athletes to train harder, recover more quickly and build more muscle, but they can lead to kidney damage and increased aggression.

Other side-effects include baldness and low sperm count for men, and increased facial hair and deepened voices for women.

Anabolic steroids are usually taken either in tablet form or injected into muscles. Some are applied to the skin in creams or gels.

Then there are stimulants, which make athletes more alert and can overcome the effects of fatigue by increasing heart-rate and blood flow. But they are addictive and, in extreme cases, can lead to heart failure.

Diuretics and masking agents are used to remove fluid from the body, which can hide other drug use or, in sports such as boxing and horse racing, help competitors "make the weight".

Narcotic analgesics and cannabinoids are used to mask the pain caused by injury or fatigue - but in practice can make injuries worse. They are also addictive. Products such as morphine and oxycodone are banned but the opiate-derived painkiller codeine is allowed.

Then there are peptide hormones. These are substances such as EPO (erythropoietin) - which increases bulk, strength and red blood cell count and gives athletes more energy - and HGH (human growth hormone), which builds muscle.

Less common is blood doping, where blood is removed from the body and injected back in later to boost oxygen levels. This practice, which can lead to kidney and heart failure, is banned.

Glucocorticoids mask serious injury because they are anti-inflammatories and affect the metabolism of carbohydrates, fat and proteins, and regulate glycogen and blood pressure levels.

Beta blockers, meanwhile, which may be prescribed for heart attack prevention and high blood pressure, are banned in sports such as archery and shooting because they keep the heart-rate low and reduce trembling in.

This involves firing a beam of electrons at urine samples to ionise them - turning the atoms into charged particles by adding or removing electrons.

Each substance the sample contains has a unique "fingerprint" and as the scientists already know the weight of many steroids, they are able to rapidly detect doping.

But there are difficulties with the system.

Some by-products of doping substances are so small they may not produce a strong enough signal for detection.

Blood testing is capable of detecting EPO and synthetic oxygen carriers, but not blood transfusions.

Blood doping is banned by the International Olympic Committee and other sports organizations.

The three widely used types of blood doping are:

Here are some more details about each of these types of blood doping:

Blood transfusions. In normal medical practice, patients may undergo blood transfusions to replace blood lost due to injury or surgery. Transfusions also are given to patients who suffer from low red blood cell counts caused by anemia, kidney failure, and other conditions or treatments.

Illicit blood transfusions are used by athletes to boost performance. There are two types.

1. Autologous transfusion. This involves a transfusion of the athlete's own blood, which is drawn and then stored for future use.

2. Homologous transfusion. In this type of transfusion, athletes use the blood of someone else with the same blood type.

EPO injections. EPO is a hormone produced by the kidney. It regulates the body's production of red blood cells.

In medical practice, EPO injections are given to stimulate the production of red blood cells. For example, a synthetic EPO can be used to treat patients with anemia related to chronic or end-stage kidney disease.

Athletes using EPO do so to encourage their bodies to produce higher than normal amounts of red blood cells to enhance performance.

We can't avoid the bodily enhancements that turn up in sports.

What will we see next? Some officials say athletes will tamper with their very genes. In gene doping, athletes would modify their genes to perform better in sports. Gene doping could stretch the physical limits of human strength and endurance. What are the consequences of gene therapy in sports competition, and more, importantly, is it safe?

How would athletes do it? They might add genes to the ones they were born with, or they might tinker with how the body uses the genes they have.

Gene doping is an unintentional spin-off of gene therapy in which, doctors add or modify genes to prevent or treat illness. Gene doping would apply the same techniques to enhancing someone who is healthy.

Genetic material can be introduced into a cell either in vivo or ex vivo. The in vivo strategy is direct gene delivery into the human body, i.e., into main blood vessels or the target tissue/organ. In indirect DNA transfer strategy, i.e., ex vivo gene delivery, cells are collected from the body of the patient, and then, after genetic modification, breeding and selection, are reintroduced into the patient's body.

In gene therapy and, similarly, in gene doping the genetic material is delivered into cells and tissues using various carriers that can be viral or non-viral. Using viral vectors (attenuated retroviruses, adenoviruses or lentiviruses) a transgene is released in target cells and is expressed using cell replication machinery. Some of these viruses, such as retroviruses, integrate their genetic material with chromosomes of a human cell. Other viruses, such as adenoviruses, introduce the transgene into the cell nucleus without chromosomal integration. The main difficulty in the application of gene transfer in gene doping is to achieve a long-lasting effect, as well as monitoring the changes induced in the genome. Integration of the transgene at the wrong site may lead to the development of cancerous cells.

One of the problems with gene doping – which is a priority for sport organizations – is the difficulty in detecting it. So far, the attempts to standardize the ideal test that could be used to detect gene doping have failed. Gene doping makes it possible to create a “super athlete”, but at the cost of breaking the rules of sporting ethics and undermining the principles of fair play in sport. It is also associated with a high risk of danger to the health of athletes.

Here are a few reasons why drug testing in sports is crucial:

Not everyone can handle the fame as well as the stress, so some sportspeople turn to illegal drugs. Through doping tests, it’s possible to determine whether or not an athlete takes illegal drugs, after which sports authorities can charge the culprit with bans and fines.

While steroids build muscle and help professionals temporarily enhance their strength and performance, it is extremely harmful to their health in the long run. This is the reason why drug tests were introduced. Through doping tests, sports authorities can identify whether any athlete consumed drugs and ban them from their league.

When an athlete consumes steroids to enhance their performance through illegal means, it raises questions on the integrity and reputation of the game. Drug testing techniques were introduced in sports to promote fair play. It ensures that no athlete enjoys an unfair advantage over other participants who are trying to win the game without implementing unfair tactics.

As drug testing methods become more advanced, athletes have uncovered innovative techniques to avoid the detection of illegal drugs which is a risk to their lives. This is the reason why some sports scientists raise their voice in favor of the legalization of certain drugs. However, sports authorities rejected these claims to preserve the reputation of the games.

Athletes overdose on certain performance-enhancing drugs to perform better and win games. However, in order to retain the integrity of sports events and protect athletes from the adverse effects of drug consumption, anti-doping authorities test players before every sports event to ensure they don’t get into illegal activities.