Information and resources about childhood cancers. 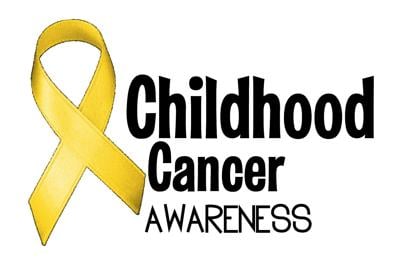 In the United States in 2019, an estimated 11,060 new cases of cancer will be diagnosed among children from birth to 14 years, and about 1,190 children are expected to die from the disease. Although cancer death rates for this age group have declined by 65 percent from 1970 to 2016, cancer remains the leading cause of death from disease among children. The most common types of cancer diagnosed in children ages 0 to 14 years are leukemias, brain and other central nervous system (CNS) tumors, and lymphomas.
National Cancer Center

How common is cancer in children?

As of January 1, 2015 (the most recent date for which data exist), approximately 429,000 survivors of childhood and adolescent cancer (diagnosed at ages 0 to 19 years) were alive in the United States. The number of survivors will continue to increase, given that the of childhood cancer has been rising slightly in recent decades and that survival rates overall are improving.

What is the outlook for children and adolescents with cancer?

Although survival rates for most childhood cancers have improved in recent decades, the improvement has been especially dramatic for a few cancers, particularly acute lymphoblastic leukemia, which is the most common childhood cancer. Improved treatments introduced beginning in the 1960s and 1970s raised the 5-year survival rate for children diagnosed with acute lymphoblastic leukemia at ages 0 to 14 years from 57% in 1975 to 92% in 2012. The 5-year survival rate for children diagnosed with non-Hodgkin lymphoma at ages 0 to 14 years has also increased dramatically, from 43% in 1975 to 91% in 2012.

Because of these survival improvements, in more recent years brain cancer has replaced leukemia as the leading cause of cancer death among children.

What are the possible causes of cancer in children?

The causes of most childhood cancers are not known. Up to 10% of all cancers in children are caused by a heritable (germline) mutation (a mutation that can be passed from parents to their children). For example, about 45% of children with retinoblastoma, a cancer of the eye that develops mainly in children, inherited a mutation in a gene called RB1 from a parent. Inherited mutations associated with certain familial syndromes, such as Li-Fraumeni syndrome, Beckwith-Wiedemann syndrome, Fanconi anemia syndrome, Noonan syndrome, and von Hippel-Lindau syndrome, also increase the risk of childhood cancer.

Genetic mutations that initiate cancer can also arise during the development of a fetus in the womb. Evidence for this comes from studies of monozygotic (identical) twins in which both twins developed leukemia with an identical leukemia-initiating gene mutation.

Children who have Down syndrome, a genetic condition caused by the presence of an extra copy of chromosome 21, are 10 to 20 times more likely to develop leukemia than children without Down syndrome. However, only a very small proportion of childhood leukemia is linked to Down syndrome.

Most cancers in children, like those in adults, are thought to develop as a result of mutations in genes that lead to uncontrolled cell growth and eventually cancer. In adults, these gene mutations are often the result of exposure to cancer-causing environmental factors, such as cigarette smoke, asbestos, and ultraviolet radiation from the sun. One study found that melanoma in children and adolescents (ages 11–20 years) has many genomic similarities to melanoma that occurs in adults, including an enrichment of UV-induced mutations.

A number of other environmental exposures have also been reported to have possible associations with childhood cancer. However, because of challenges in studying these associations, such as recall bias and the difficulty of determining exposure at the relevant time period in a child’s development, it is difficult to draw firm conclusions. Some types of childhood leukemia have been associated with father’s tobacco smoking; with exposure to certain pesticides used in and around the home or by parents at their workplace; with solvents, which are organic chemicals that are found in some household products; and with outdoor air pollution. Studies of childhood brain tumors have suggested possible associations with exposures to pesticides in and around the home and maternal consumption of cured meats.

How do cancers in adolescents and young adults differ from those in younger children?

Cancer occurs more frequently in adolescents and young adults ages 15 to 39 years than in younger children, although incidence in this group is still much lower than in older adults. According to the NCI Surveillance, Epidemiology, and End Results (SEER) program, each year in 2011–2015 there were:

The most frequent cancers diagnosed in adolescents and young adults (AYAs) are cancers that are more common among adults than younger children, such as breast cancer, melanoma, and thyroid cancer. But certain cancers, such as testicular cancer, are more typical of AYAs than of either younger children or adults. However, the incidence of specific cancer types varies widely across the adolescent and young adult age continuum.

Where do children with cancer get treated?

Children who have cancer are often treated at a children’s cancer center, which is a hospital or a unit within a hospital that specializes in diagnosing and treating children and adolescents who have cancer. Most children’s cancer centers treat patients through 20 years of age. The health professionals at these centers have specific training and expertise to provide comprehensive care for children, adolescents, and their families.

Recently, many Adolescent and Young Adult (AYA) cancer programs have been created to address the unique needs of teens and young adults. Areas of focus include long-term survivor care, access to clinical trial enrollment, discussing and preserving future fertility, peer support, and psychosocial support that addresses their personal issues, including finances, education, occupational impacts, and transition to independence.

Children’s cancer centers also participate in clinical trials. The improvements in survival for children with cancer that have occurred over the past half century have been achieved because of treatment advances that were studied and proven to be effective in clinical trials.

More than 90% of children and adolescents who are diagnosed with cancer each year in the United States are cared for at a children’s cancer center that is affiliated with the NCI-supported Children’s Oncology Group (COG). COG is the world’s largest organization that performs clinical research to improve the care and treatment of children and adolescents with cancer. Each year, approximately 4,000 children who are diagnosed with cancer enroll in a COG-sponsored clinical trial. COG trials are sometimes open to individuals aged 29 years or even older when the type of cancer being studied is one that occurs in children, adolescents, and young adults.

In 2005, 2.9 of every 100,000 people 0–19 years of age were found to have cancer of the brain or central nervous system, and 0.7 per 100,000 died from it. These cancers were found most often in children between 1 and 4 years of age, but the most deaths occurred among those aged 5–9. The main subtypes of brain and central nervous system tumors in children are: astrocytoma, brain stem glioma, craniopharyngioma, desmoplastic infantile ganglioglioma, ependymoma, high-grade glioma, medulloblastoma and atypical teratoid rhabdoid tumor.

Cancer support groups are meetings for people with cancer and anyone touched by the disease. They can have many benefits. Even though a lot of people receive support from friends and family, the number one reason they join a support group is to be with others who have similar cancer experiences. Some research shows that joining a support group improves both quality of life and survival.