"Civil Disobedience," "Social Activism," "Black Lives Matter," "Anti-Racism," and other topics are covered in this guide. 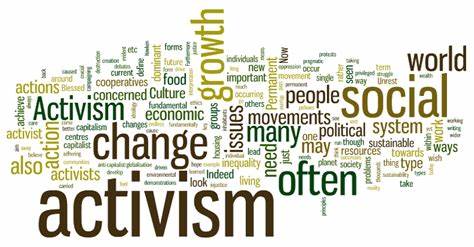 Civil disobedience has been a major tactic and philosophy of nationalist movements in Africa and India, in the American civil rights movement, and of labor, anti-war, and other social movements in many countries. It is because acts associated with civil disobedience are considered crimes , however, and known by actor and public alike to be punishable, that such acts serve as a protest. By submitting to punishment, the civil disobedient hopes to set a moral  example that will provoke the majority or the government into effecting meaningful political, social, or economic change. Under the imperative of setting a moral example, leaders of civil disobedience insist that the illegal actions be nonviolent.

The philosophical roots of civil disobedience lie deep in Western thought: Cicero, Thomas Aquinas, John Locke, Thomas Jefferson, and Henry David Thoreau all sought to justify conduct by virtue of its harmony with some antecedent superhuman moral law. The modern concept of civil disobedience was most clearly formulated by Mahatma Gandhi.

Social activism is the promotion and guidance used to cultivate changes in business practices, business policies or the government to influence social change. The duties of a social activist include communicating with policy makers, researching for the cause, and organizing responses for the media.

Social activism is commonly focused on the conditions that directly impact the standards of living for those in society who are exposed to it. Some of the societal problems that have become a platform for social activist groups include medications, pesticides and chemical systems. A social activist is required to talk to a wide variety of people both within the group and those they oppose.

#BlackLivesMatter was founded in 2013 in response to the acquittal of Trayvon Martin’s murderer. Black Lives Matter Foundation, Inc is a global organization in the US, UK, and Canada, whose mission is to eradicate white supremacy and build local power to intervene in violence inflicted on Black communities by the state and vigilantes. By combating and countering acts of violence, creating space for Black imagination and innovation, and centering Black joy, we are winning immediate improvements in our lives.

We are expansive. We are a collective of liberators who believe in an inclusive and spacious movement. We also believe that in order to win and bring as many people with us along the way, we must move beyond the narrow nationalism that is all too prevalent in Black communities. We must ensure we are building a movement that brings all of us to the front.

We affirm the lives of Black queer and trans folks, disabled folks, undocumented folks, folks with records, women, and all Black lives along the gender spectrum. Our network centers those who have been marginalized within Black liberation movements.

We are working for a world where Black lives are no longer systematically targeted for demise.

We affirm our humanity, our contributions to this society, and our resilience in the face of deadly oppression.

The call for Black lives to matter is a rallying cry for ALL Black lives striving for liberation.

According to the Anti-racism Digital Library, "Anti-racism can be defined as some form of focused and sustained action, which includes inter-cultural, inter-faith, multi-lingual and inter-abled (i.e. differently abled) communities with the intent to change a system or an institutional policy, practice, or procedure which has racist effects.

Merriam-Webster will tell you the first known use of "anti-racist" was in 1943 — the same year Marxist historian Herbert Aptheker dismantled the longstanding argument that African Americans accepted slavery in his book "American Negro Slave Revolts."

Aptheker, who later became the literary executor for author and civil-rights activist W.E.B. DuBois, subsequently overturned the then widely held idea that all whites universally accepted racism in his book "Anti-Racism in US History: The First 200 Years."

"Many Americans struggle to be anti-racist, to see the racism in racial disparities, to cease blaming black people for disproportionate black disease and death, to instead blame racist power and policy and racist ideas for normalizing all the carnage. They struggle to focus on securing anti-racist policies that will lead to life, health, equity, and justice for all, and to act from anti-racist ideas that value black lives, that equalize all the racial groups in all their aesthetic and cultural differences."

In the United States.

Native Americans, also known as American Indians, Indigenous Americans and other terms, are the indigenous peoples of the United States, except Hawaii and territories of the United States. There are 574 federally recognized tribes living within the US, about half of which are associated with Indian reservations. The term "American Indian" excludes Native Hawaiians and some Alaskan Natives, while "Native Americans" (as defined by the US Census) are American Indians, plus Alaska Natives of all ethnicities. The US Census does not include Native Hawaiians, Samoans, or Chamorros, instead being included in the Census grouping of "Native Hawaiian and other Pacific Islander".