This guide provides information and resources about different types of eating disorders. 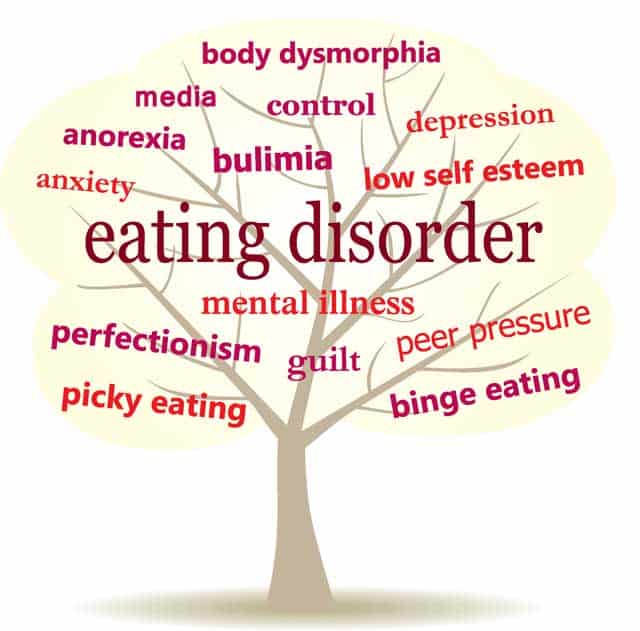 What are Eating Disorders?

Eating disorders are a range of psychological conditions that cause unhealthy eating habits to develop. They might start with an obsession with food, body weight, or body shape.

In severe cases, eating disorders can cause serious health consequences and may even result in death if left untreated.

Those with eating disorders can have a variety of symptoms. However, most include the severe restriction of food, food binges, or purging behaviors like vomiting or over-exercising.

Although eating disorders can affect people of any gender at any life stage, they're most often reported in adolescents and young women. In fact, up to 13% of youth may experience at least one eating disorder by the age of 20.

There are many types of eating issues, but the four eating disorders recognized in the latest edition of the Diagnostic and Statistical Manual of Mental Disorders (DSM-5) are:

Plus, episodes of binge eating that involve at least three of these five behaviors:

In addition to disrupting your day-to-day activities, an eating disorder can affect your mental and emotional health. You might find yourself feeling more anxious about the number of calories you consume or ashamed about your weight. You may start to isolate from friends and family who express concerns about your health, and that isolation can lead to depression.

The physical impact of an eating disorder can be significant. Over time, disordered eating behaviors can damage your digestive tract, skin, bones, and teeth, as well as the functioning of various other organs, such as your heart. Eating disorders have the highest death rate among mental health conditions, especially anorexia. In fact, the risk of early death for those with anorexia is 18 times higher than that of their peers. That’s why early recognition of symptoms and appropriate treatment are essential.

Because OSFED encompasses a wide variety of eating disordered behaviors, any or all of the following symptoms may be present in people with OSFED.

Despite the stereotype that eating disorders only occur in women, about one in three people struggling with an eating disorder is male, and subclinical eating disordered behaviors (including binge eating, purging, laxative abuse, and fasting for weight loss) are nearly as common among men as they are among women.

In the United States alone, eating disorders will affect 10 million males at some point in their lives. But due in large part to cultural bias, they are much less likely to seek treatment for their eating disorder. The good news is that once a man finds help, they show similar responses to treatment as women. Several factors lead to men and boys being under- and undiagnosed for an eating disorder. Men can face a double stigma, for having a disorder characterized as feminine or gay and for seeking psychological help. Additionally, assessment tests with language geared to women and girls have led to misconceptions about the nature of disordered eating in men.

There are numerous studies on male body image, and results vary widely. Many men have misconceived notions about their weight and physique, particularly the importance of muscularity. Findings include:

Most males would like to be lean and muscular, which typically represents the “ideal” male body type. Exposure to unattainable images in the media leads to male body dissatisfaction.

The sexual objectification of men and internalization of media images predicts drive for muscularity.

The desire for increased musculature is not uncommon, and it crosses age groups. 25% of normal weight males perceive themselves to be underweight and 90% of teenage boys exercised with the goal of bulking up.

Muscle dysmorphia, a subtype of body dysmorphic disorder, is an emerging condition that primarily affects male bodybuilders. Such individuals obsess about being adequately muscular. Compulsions include spending many hours in the gym, squandering excessive amounts of money on supplements, abnormal eating patterns, or use of steroids.

Treatment plans are tailored to individual needs and may include one or more of the following:

Psychotherapies such as a family-based therapy called the Maudsley approach, where parents of adolescents with anorexia nervosa assume responsibility for feeding their child, appear to be very effective in helping people gain weight and improve eating habits and moods.

To reduce or eliminate binge-eating and purging behaviors, people may undergo cognitive behavioral therapy (CBT), which is another type of psychotherapy that helps a person learn how to identify distorted or unhelpful thinking patterns and recognize and change inaccurate beliefs.

Evidence also suggests that medications such as antidepressants, antipsychotics, or mood stabilizers may also be helpful for treating eating disorders and other co-occurring illnesses such as anxiety or depression. Check the Food and Drug Administration’s (FDA) website for the latest information on warnings, patient medication guides, or newly approved medications.

Please Note: Decisions whether to apply for a clinical trial and which ones are best suited for a given individual are best made in collaboration with your licensed health professional.