This guide is intended as a starting place for finding information about elections, voting and other related sources. 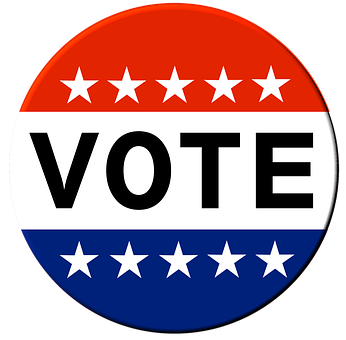 The Right to Vote

The right to vote is a significant civil liberty for all Americans because it impacts all other rights we have. The opportunity for citizens to choose who represents them in government represents everything that a democracy aspires to be. These ideals are not reflected in the Constitution by an absolute right to vote. Instead, state governments can enact their own voting laws and they can vary drastically. However, the federal government has certain, limited voting rights laws to help preserve and protect this essential right.

People who are not citizens are legally barred from voting in federal elections. In many states, felons are not allowed to vote.

The 15th Amendment to the U.S. Constitution, ratified in 1870, granted African American men the right to vote by declaring that the "right of citizens of the United States to vote shall not be denied or abridged by the United States or by any state on account of race, color, or previous condition of servitude."

The 19th Amendment to the U.S. Constitution granted American women the right to vote, a right known as women’s suffrage, and was ratified on August 18, 1920.

In 1964 the United States ratified the 24th Amendment to the Constitution, prohibiting any poll tax in elections for federal officials.

Ratified in 1971, the 26th Amendment changed a portion of the 14th Amendment. It states "The right of citizens of the United States, who are eighteen years of age or older, to vote shall not be denied or abridged by the United States or by any State on account of age."

In 1965 President Lyndon B. Johnson signed the Voting Rights Act into law, permanently barring barriers to political participation by racial and ethnic minorities, prohibiting any election practice that denies the right to vote on account of race, and requiring jurisdictions with a history of discrimination in voting to get federal approval for changes in their election laws before they can take effect.

Extensive research reveals that fraud is very rare. Yet repeated, false allegations of fraud can make it harder for millions of eligible Americans to participate in elections.

It is important to protect the integrity of our elections. But we must be careful not to undermine free and fair access to the ballot in the name of preventing phantom voter fraud.

Politicians at all levels of government have repeatedly, and falsely, claimed the 2016 and 2018 elections were marred by millions of people voting illegally. However, extensive research reveals that fraud is very rare, voter impersonation is virtually nonexistent, and many instances of alleged fraud are, in fact, mistakes by voters or administrators. The same is true for mail ballots, which are secure and essential to holding a safe election amid the coronavirus pandemic.

The Brennan Center's seminal report The Truth About Voter Fraud conclusively demonstrated that most allegations of fraud turn out to be baseless and that most of the few remaining allegations reveal irregularities and other forms of election misconduct. Numerous other studies, including one commissioned by the Trump administration, have reached the same conclusion.

Voter fraud is unacceptable, but we must find solutions that address actual problems instead of imposing policies that make it harder for millions of eligible Americans to participate in our democracy.

Even after the 15th Amendment guaranteed the right to vote for Black Americans, casting a ballot still came with barriers. Black voters were denied access to the polls through literacy tests, poll taxes, and intimidation by white supremacist groups (these didn’t disenfranchise white voters in the same way because of exclusionary “grandfather clauses”). Historically, voters of color and low-income voters have had their right to vote suppressed by those in power, and similar practices remain today -- just in new, more subtle ways.

In 2013, the Supreme Court gutted  Section 5 of the Voting Rights Act, which previously required states with a history of racial discrimination in voting to submit all proposed voting changes to the US Department of Justice. Now, left unchecked, states are enacting policies that inhibit equal participation in our democracy.

Below are seven signs that this kind of voter suppression could be happening near you.

1. Making it harder to register to vote.

4. Reducing the number of polling places.

As the coronavirus pandemic continues to grip the country, more states have embraced mail-in voting as a way to prevent large crowds from gathering at polling places.

The Centers for Disease Control and Prevention has recommended states encourage voters to cast ballots through the mail and a number of governors and elections officials have begun taking steps to make doing so easier while litigation over the issue continues.

But President Trump and other Republicans have suggested the practice invites fraud, despite studies suggesting otherwise.

The rest of the states can be divided into two categories: those that allow any registered voter to apply for mail-in ballots, and those that require an excuse.

Increasing voting by mail also comes at a cost for states. Though the CARES Act allocated $400 million in election assistance for states, experts say more is required, even as states face budget fallouts spurred by the sudden economic crisis.

Click here to find out where all the states currently fall on mail-in voting.

The nation faces all sorts of serious problems, from growing inequality to spreading international terrorism, but the bitter fight between Democrats and Republicans has largely ground government to a halt and the American people are caught in the middle.Partisans on both sides are so angry they can barely speak with the other, much less work together.

A recent Pew Research survey found that 36 percent of Republicans thought that liberal policies are “a threat to the nation’s well-being.” 27 percent of Democrats feel the same way about conservatives. They don’t just think they have better ideas or their opponents are misguided and honestly believe that the other side is more interested in partisan gain than the well-being of the nation. Many of the more extreme partisans simply refuse to work with the other side. The result is that the two parties have the nation’s capital, and many state capitals, in a death grip.

We can’t solve problems unless we can discuss them rationally, and we aren’t having a rational discussion about anything.

This will give voters more choices at the polls. It will also bring new ideas into the political debate, which will mean that public policy issues may be debated as if there are a range of possible solutions. This will get us away from the idea that every issue is a death match between left and right. And then maybe we can seriously address the issues facing the nation.

More voters prefer to elect the president by national, popular vote over the existing Electoral College system, according to a new POLITICO/Morning Consult poll.

The debate over whether the Electoral College is a sound way to protect the power of states or a historical vestige of slavery-era America has careened through the 2020 presidential race, as Democratic candidates have almost unanimously called for its end in recent weeks. The Democratic nominee has won the most votes in six of the last seven presidential elections — but twice, in 2000 and 2016, lost the Electoral College count.

There are two ways of replacing or circumventing the Electoral College, and pluralities of voters support each of them, the poll shows. Asked about the National Popular Vote Compact — in which states bind their electors to the winner of the national popular vote, and not the election results in their states — 43 percent support states’ awarding their electoral votes to the national victor. Just a third, 33 percent, would prefer to keep the Electoral College, and 23 percent have no opinion.