This guide will help you determine the kinds of fake news that exist and provide tools for how to evaluate news for its reliability and truth. 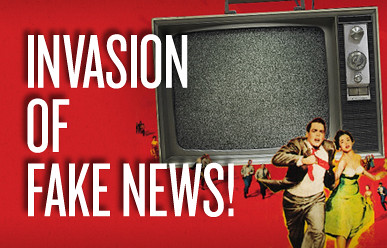 What is Fake News?

Fake news is made-up stuff, masterfully manipulated to look like credible journalistic reports that are easily spread online to large audiences willing to believe the fictions and spread the word.

CATEGORY 1: Fake, false, or regularly misleading websites that are shared on Facebook and social media. Some of these websites may rely on “outrage” by using distorted headlines and decontextualized or dubious information in order to generate likes, shares, and profits.

CATEGORY 2: Websites that may circulate misleading and/or potentially unreliable information

CATEGORY 4: Satire/comedy sites, which can offer important critical commentary on politics and society, but have the potential to be shared as actual/literal news

No single topic falls under a single category - for example, false or misleading medical news may be entirely fabricated (Category 1), may intentionally misinterpret facts or misrepresent data (Category 2), may be accurate or partially accurate but use an alarmist title to get your attention (Category 3) or may be a critique on modern medical practice (Category 4.)  Some articles fall under more than one category.  Assessing the quality of the content is crucial to understanding whether what you are viewing is true or not. It is up to you to do the legwork to make sure your information is good.

(On the Internet) content whose main purpose is to attract attention and encourage visitors to click on a link to a particular web page.

The tendency to interpret new evidence as confirmation of one's existing beliefs or theories.

False information that is intentiionally spread to mislead, especially propaganda issued by a government organization to a rival power or the media.

A hoax is a form of fake news. It is simply made up information.

Relating to or denoting circumstances in which objective facts are less influential in shaping public opinion than appeals to emotion and personal belief.

The use of humor, irony, exaggeration, or ridicule to expose and criticize people's stupidity or vices, particularly in the context of contemporary politics and other topical issues.

A fake news article may or may not have links in it tracing its  sources. If it does, these links may not lead to

articles outside of the site's domain or may not contain information pertinent to the article topic.

Fake news plays on your feelings - it makes you angry or happy or scared. This is to ensure you won't do anything

as pesky as fact-checking.

Most authors aren't even journalists, but paid trolls.

If you look up the main idea of a fake news article, you might not find any other news outlet (real or not) reporting

Did your article come from abcnews.com.co? Or mercola.com?  Realnewsrightnow.com? These and a host of

other URLs are fake news sites.

Be wary of ads disguised as stories.

The internet is a revenue-generating giant for advertisers, and some companies have found success in disguising their ads as news stories in website sidebars, feeds and at the footer of credible stories. You’ve surely seen the ads for “This one weird trick to help you lose weight.” Finding Good Health Information on the Internet can also be a slog through fake and biased information intended to sell you products. You can always trust Medline Plus for accurate, supported information on health issues.

Fake news” is not news you disagree with. The ability to tell accurate news from fake news is an important skill that you'll use your entire life.  This guide will give you valuable insight in telling fact from fiction online, plus a chance to exercise your newfound skills.

There is no such thing as an alternative fact. Facts are objective. Although people can disagree on perspetive and reasoning, simple facts cannot be disputed.

"You are entitled to your own opinion but not your own facts."  Daniel Patrick Moynihan

Make use of your library.

In a time where people don't know which resources to believe, having librarians who can guide them to credible information is crucial.

Public Libraries Online , a publication of the PLA

1. First, social media act as news aggregators that are "source-agnostic." That is, they collect and present news stories from a wide variety of outlets, regardless of the quality, reliability, or political leanings of the original source. Without a sense of the reputation of the original publisher being clear, it’s easy for fly-by-night provocateurs and manipulators to get their fake stories to approach the prominence of the traditional media outlets. If readers can’t readily identify who wrote or provided information for a story, it’s hard to judge its honesty without elaborate fact-checking, which most people don’t do.

2. Second, many news stories get conveyed to people on social media via their friends or people they follow, along with their implicit or explicit endorsement of the story such as a share, like, or retweet. These tacit recommendations make people more accepting of the messages they get. On social media apps, “Many messages are shared in groups, and when they are forwarded, there is no indication of their origin. (False stories) have often appeared to come from family and friends.”

3. Third, relatedly, social media platforms automatically tag articles with indications of their popularity (the number of views or likes they’ve gotten, which is further complicated by online robots that can systematically inflate popularity indicators), which also makes people more likely to tune in to a story when those counts are high.

So, while history offers some important lessons, this isn’t your grandparents’ fake news any more.

You deserve the truth.  You are smart enough to make up your own mind - as long as you have the real facts in front of you.  You have every right to be insulted when you read fake news, because you are in essence being treated like an idiot.

Fake news destroys your credibility.  If your arguments are built on bad information, it will be much more difficult for people to believe you in the future.

Fake news can hurt you and a lot of other people.  Purveyors of fake and misleading medical advice like Mercola.com and NaturalNews.com help perpetuate myths like HIV and AIDS aren't related, or that vaccines cause autism. These sites are heavily visited and their lies are dangerous.

Real news can benefit you.  If you want to buy stock in a company, you want to read accurate articles about that company so you can invest wisely.  If you are planning on voting in an election, you want to read valid and factual information on a candidate so you can vote for the person who best represents your ideas and beliefs.  Fake news will not help you make money or make the world a better place, but real news can.