Information on the State of Nebraska. 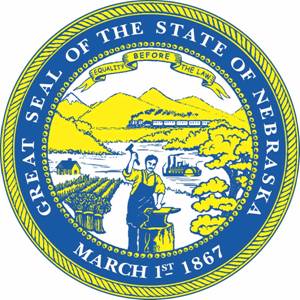 Nebraska is a state that lies in both the Great Plains and the Midwestern United States. It is bordered by South Dakota to the north; Iowa to the east and Missouri to the southeast, both across the Missouri River; Kansas to the south; Colorado to the southwest; and Wyoming to the west. It is the only triply landlocked U.S. state.

Nebraska's area is just over 77,220 square miles (200,000 km2) with a population of almost 1.9 million people. Its state capital is Lincoln, and its largest city is Omaha, which is on the Missouri River.

Indigenous peoples, including Omaha, Missouria, Ponca, Pawnee, Otoe, and various branches of the Lakota (Sioux) tribes, lived in the region for thousands of years before European exploration. The state is crossed by many historic trails, including that of the Lewis and Clark Expedition.

Nebraska has two major climatic zones. The eastern half of the state has a humid continental climate (Köppen climate classificationDfa); a unique warmer subtype considered "warm-temperate" exists near the southern plains like in Kansas and Oklahoma which have a predominantly humid subtropical climate. The western half of the state has a primarily semi-arid climate (Koppen BSk). The state has wide variations between winter and summer temperatures, variations that decrease moving south in the state. Violent thunderstorms and tornadoes occur primarily during spring and summer and sometimes in autumn. Chinook winds tend to warm the state significantly in the winter and early spring.

Name based on an Otoe Indian word meaning "flat water," referring to the Platte River

State motto: Equality Before the Law

The state is bordered by South Dakota to the north; Iowa to the east and Missouri to the southeast, across the Missouri River; Kansas to the south; Colorado to the southwest; and Wyoming to the west. The state has 93 counties and is split between two time zones, with the state's eastern half observing Central Time and the western half observing Mountain Time. Three rivers cross the state from west to east. The Platte River, formed by the confluence of the North Platte and the South Platte, runs through the state's central portion, the Niobrara River flows through the northern part, and the Republican River runs across the southern part.

Nebraska is composed of two major land regions: the Dissected Till Plains and the Great Plains. The easternmost portion of the state was scoured by Ice Age glaciers; the Dissected Till Plains were left after the glaciers retreated. The Dissected Till Plains is a region of gently rolling hills; Omaha and Lincoln are in this region. The Great Plains occupy most of western Nebraska, with the region consisting of several smaller, diverse land regions, including the Sandhills, the Pine Ridge, the Rainwater Basin, the High Plains and the Wildcat Hills. Panorama Point, at 5,424 feet (1,653 m), is Nebraska's highest point; though despite its name and elevation, it is a relatively low rise near the Colorado and Wyoming borders. A past Nebraska tourism slogan was "Where the West Begins" (currently, "Honestly, it's not for everyone"]); locations given for the beginning of the "West" include the Missouri River, the intersection of 13th and O Streets in Lincoln (where it is marked by a red brick star), the 100th meridian, and Chimney Rock.

Two major climatic zones are represented in Nebraska: the state's eastern half and its western half. The eastern half of the state has a humid continental climate (Köppen climate classification Dfa). The western half has a semi-arid climate (Koppen BSk). The entire state experiences wide seasonal variations in both temperature and precipitation. Average temperatures are fairly uniform across Nebraska, with hot summers and generally cold winters.

Nebraska is located in Tornado Alley. Thunderstorms are common during both the spring and the summer. Violent thunderstorms and tornadoes happen primarily during those two seasons, although they also can occur occasionally during the autumn. The chinook winds from the Rocky Mountains provide a temporary moderating effect on temperatures in the state's western portion during the winter.