This guide offers some helpful resources on the topic of stress and stress management. 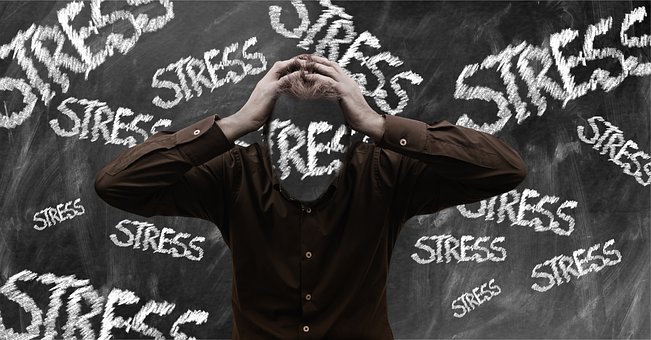 In a medical or biological context stress is a physical, mental, or emotional factor that causes bodily or mental tension. Stresses can be external (from the environment, psychological, or social situations) or internal (illness, or from a medical procedure). Stress can initiate the "fight or flight" response, a complex reaction of neurologic and endocrinologic systems.

Catecholamine hormones, such as adrenaline or noradrenaline, facilitate immediate physical reactions associated with a preparation for violent muscular action. These include the following: Acceleration of heart and lung action, paling or flushing, or alternating between both, inhibition of stomach and upper-intestinal action to the point where digestion slows down or stops, the general effect on the sphincters of the body, constriction of blood vessels in many parts of the body, liberation of nutrients (particularly fat and glucose) for muscular action, dilation of blood vessels for muscles, inhibition of the lacrimal gland (responsible for tear production) and salivation, dilation of pupil (mydriasis), relaxation of bladder, inhibition of erection, auditory exclusion (loss of hearing), tunnel vision (loss of peripheral vision), disinhibition of spinal reflexes, and shaking.

Stress can cause or influence the course of many medical conditions including psychological conditions such as depression and anxiety. Medical problems can include poor healing, irritable bowel syndrome, high blood pressure, poorly controlled diabetes and many other conditions. Stress management is recognized as an effective treatment modality to include pharmacologic and non-pharmacologic components.

Here are five healthy techniques that psychological research has shown to help reduce stress in the short- and long-term.

Take a break from the stressor. It may seem difficult to get away from a big work project, a crying baby or a growing credit card bill. But when you give yourself permission to step away from it, you let yourself have time to do something else, which can help you have a new perspective or practice techniques to feel less overwhelmed. It’s important to not avoid your stress (those bills have to be paid sometime), but even just 20-minutes to take care of yourself is helpful.

Exercise. The research keeps growing — exercise benefits your mind just as well as your body. We keep hearing about the long-term benefits of a regular exercise routine. But even a 20-minute walk, run, swim or dance session in the midst of a stressful time can give an immediate effect that can last for several hours.

Smile and laugh. Our brains are interconnected with our emotions and facial expressions. When people are stressed, they often hold a lot of the stress in their face. So laughs or smiles can help relieve some of that tension and improve the situation.

Get social support. Call a friend, send an email. When you share your concerns or feelings with another person, it does help relieve stress. But it’s important that the person whom you talk to is someone whom you trust and whom you feel can understand and validate you. If your family is a stressor, for example, it may not alleviate your stress if you share your works woes with one of them.

Meditate. Meditation and mindful prayer help the mind and body to relax and focus. Mindfulness can help people see new perspectives, develop self-compassion and forgiveness. When practicing a form of mindfulness, people can release emotions that may have been causing the body physical stress. Much like exercise, research has shown that even meditating briefly can reap immediate benefits.

Stress is an inevitable part of life. Seven out of ten adults in the United States say they experience stress or anxiety daily, and most say it interferes at least moderately with their lives, according to the most recent ADAA survey on stress and anxiety disorders. When the American Psychological Association surveyed people in 2008, more people reported physical and emotional symptoms due to stress than they did in 2007, and nearly half reported that their stress has increased in the past year.

It’s impossible to eliminate, but you can learn to manage stress, and most people usually do. According to a recent ADAA online poll, some 14 percent of people make use of regular exercise to cope with stress. Others reported talking to friends or family (18 percent); sleeping (17 percent); watching movies or TV (14 percent), as well as eating (14 percent) and listening to music (13 percent).

While all of these are well-known coping techniques, exercise may be the one most recommended by health care professionals. And among ADAA poll takers who exercise, a healthy percentage is already on the right track: Walking (29 percent), running (20 percent), and yoga (11 percent) are their preferred strategies.

The physical benefits of exercise—improving physical condition and fighting disease—have long been established, and physicians always encourage staying physically active. Exercise is also considered vital for maintaining mental fitness, and it can reduce stress. Studies show that it is very effective at reducing fatigue, improving alertness and concentration, and at enhancing overall cognitive function. This can be especially helpful when stress has depleted your energy or ability to concentrate.

When stress affects the brain, with its many nerve connections, the rest of the body feels the impact as well. So it stands to reason that if your body feels better, so does your mind. Exercise and other physical activity produce endorphins—chemicals in the brain that act as natural painkillers—and also improve the ability to sleep, which in turn reduces stress. Meditation, acupuncture, massage therapy, even breathing deeply can cause your body to produce endorphins. And conventional wisdom holds that a workout of low to moderate intensity makes you feel energized and healthy.

Scientists have found that regular participation in aerobic exercise has been shown to decrease overall levels of tension, elevate and stabilize mood, improve sleep, and improve self-esteem. Even five minutes of aerobic exercise can stimulate anti-anxiety effects.

Anxiety and Depression Association of America

Some tips on improving your diet: