A guide for students and researchers interested in comics and graphic novels. 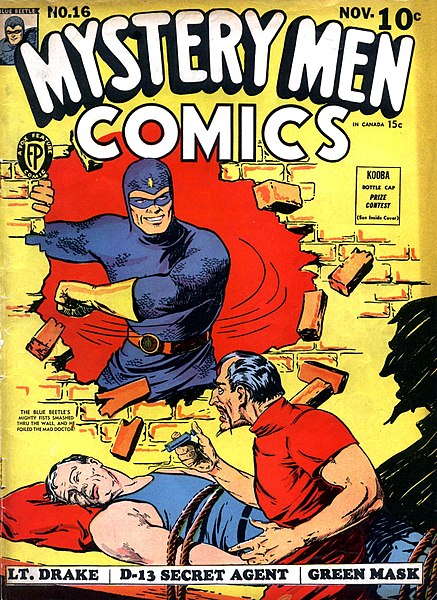 The terms “graphic novel” and “comic book” are not synonyms. Although both formats feature illustration-based storytelling, they have distinctions that reveal substantive differences.

What Is a Comic Book?

A comic book is an excerpt from a larger serialized narrative that is told via illustration. Famous comic book publishers include Archie Comics, Marvel Comics, and DC Comics. From the mid-twentieth century through the present day, these publishers and other similar companies have issued comic books on a weekly or monthly basis in the form of books or as pieces of sequential art called comic strips, which are published in magazines or newspapers. These comics contain excerpts from long-running narratives that can last for years or even decades.

What Is a Graphic Novel?

A graphic novel, as its name suggests, is a novel that tells a complete story via illustrations. A graphic novel contains a beginning, middle, and end. A graphic novel will offer the type of resolution that one expects from a novel, even if it is part of a series. Effectively, this makes a graphic novel longer and more substantive than a comic book, which is a serialized excerpt from a larger narrative.

Comics have been in existence since the end of the 19th century, but it was after the depression that the popularity of newspaper cartoons expanded into a major industry.

The precise era of the Golden Age is disputed, though most agree that it was born with the launch of Superman in 1938. Created by Jerry Siegel and Joe Shuster, Superman is possibly the most recognizable comic book character to this day.

The success of Superman spawned a series of spin-offs and created a whole new genre of characters with secret identities, superhuman powers and colorful outfits – the superhero. Batman and Robin, Wonder Woman, Plastic Man, Green Lantern and Flash were amongst those who followed.

Captain Marvel proved to be one of the most popular superhero comics of the Golden Age, regularly outselling the adventures of Superman during the 1940s.

The sales of comic books increased markedly during World War II. They were cheap, portable and had inspirational, patriotic stories of good triumphing over evil. The tales very much reflected the events and values of the time. Pro-American characters were popular, particularly Captain America, a superhero whose entire creation was based on aiding the country’s war effort.

Sporting the stars and stripes as his costume, Captain America was pictured battling Adolf Hitler on the cover of the very first issue.

Though the superhero comics were the top sellers, other genres emerged during the Golden Age.

Horror and crime were popular, notably The Spirit, a masked detective who captured villains and dispensed justice.

Science fiction and Western-themed comics were some of the new styles of story-telling that started to appear. The teen genre was also gaining interest. A comic strip featuring a red-head named Archibald "Archie" Andrews debuted in 1941, becoming so popular the company that created it changed its name to Archie Comics in 1946.

After the war, the superhero genre lost steam, marking what many consider to be the end of the Golden Age. The era itself, though, left an indelible mark on comic books with many of the characters remaining popular almost 70 years later. The first superhero, Superman is still alive and well in popular culture today.

Perhaps one of the most important impacts of the Golden Age was the cementation of the comic as a mainstream artform, with its own defined language and creative conventions.

While comic books and graphic novels have increased in popularity among children of all ages in the last few years, there are still some parents and educators that dismiss the medium as trivial or "not a real book" or "junk." We live in a visual society. It only makes sense that children are drawn to visual media.

Here are some things you might not know about comic books and graphic novels and how they can turn your child into a "super" reader:

3. Do you have a kid that skims the page or speed reads? When reading comics, children slow down and look at the images and text to fully ingest what's happening in the plot.

4. Graphic novels are bringing art education (which is often an endangered program in schools) into the classroom.

5.  Graphic novels are great for kids with learning disabilities. Children with autism can learn a lot about identifying emotions through the images in a graphic novel. Additionally, for children with dyslexia, while it might be very frustrating for them to finish a page of a traditional book, they often feel a sense of accomplishment when they complete a page in a comic book. Accomplishment is important. It's a huge self-esteem booster and leads to kids naturally wanting to read more.

6. When kids have lower self-esteem because they aren't strong readers that can discourage them from wanting to read. But graphic novels are a great way to promote literacy. Teachers and librarians do not want to give ESL students picture books. Kids would reject that and deem it embarrassing. However, a comic book at a lower reading level might give kids the reading confidence they need while boosting reading and language skills.

8. Do you remember those wordless picture books that your toddler might have chewed on? Well, there are also wordless comic books. These offer a plethora of learning benefits – critical thinking, sequencing, imagination, storytelling, and creativity. Just think, every time that your child reads the book, it will be completely unique. Although the book is filled with pictures, it's a blank slate just waiting for your child's imagination to take shape.

Remember, there are a ton of great books and a ton of not-so-great books. The same is true of graphic novels and comics. Do your homework before choosing graphic novels for kids. Go to the experts if you need advice -- teachers and librarians are there to help!

There is something of a stigma surrounding comics and graphic novels. Their ample use of images rings in people minds as akin to childish picture-books. Much like cartoons, comics and graphic novels suffer from the assumption that only children can, or should, enjoy them. While children certainly enjoy reading comic books, and an ample supply of the comics on the market are meant for children, there is also a thriving market of comic stories meant to be relevant to adults. When it comes to comic books for adults, the thought is that with fewer words per page, this makes graphic novel reading easier and thus less fulfilling than reading a full prose novel. Additionally, there exists and undesirable stereotype about the kind of adult who reads comic books: that of an obsessive, dysfunctional, child-like adult. Let’s banish all of these misconceptions from our minds. Just as there is traditional literature of every genre for every age, so too, are there impactful comics for everyone of any background.

Comic books (as well as their Eastern counterpart, called manga/manhwa) have been making strides recently both in widespread popularity and in credibility as a legitimate form of art and storytelling.

In 1992, the historical memoir graphic novel Maus, became the first graphic novel to win the Pulitzer Prize. As a result, it is often read alongside other historical literature in classrooms around the country. The first volume of Brian K. Vaughn and Fiona Staples’ Saga series, a provocative space opera with elements of fantasy, won a Hugo Award in 2013.

In 2009, five comic book artists had their artwork displayed at the Louvre in Paris as a part of a special exhibit. Among the participating artists was Hirohiko Araki of Japan, the mangaka (comic book artist) who created the internationally acclaimed manga series Jojo’s Bizarre Adventure.

As we can see, comics, manga, and graphic novels have continuously proven their legitimacy as a media for art and storytelling. They can offer a fulfilling reading experience for people of any age, often with a smaller time commitment. As a visual medium, graphic novels are distinctly poised to enrich the experience of stories in which world-building or character nuance is key. The novel’s artwork allows the author’s vision to be communicated in the truest way. There exist many comic book adaptations of already existing classic or acclaimed literature.

Marvel Comics Marvel Comics is now owned by The Walt Disney Corporation and have over 8,000 characters from various media dating back over 75 years. They have been publishing as Marvel since 1961. Famous ongoing series include Spider-Man, Fantastic Four, The Avengers, and many more.

DC Comics
DC Comics is a subsidiary of Warner Bros dating back to 1934. Some of their biggest series superheroes include Superman, Batman, Wonder Woman, and Green Lantern. Superman was first introduced in their Action Comics series, and they are often credited with spawning the "superhero" archetype.

Dark Horse Comics
Dark Horse was founded in 1986 by Mike Richardson. Some early series included Hellboy, The American, The Mask, and Sin City. They are most known now for acquiring the rights to adapt film, television, and video game series into comics. Some of these include Aliens, Robocop, The Legend of Zelda, and Planet of the Apes.

Archie Comics
Archie Comics started in 1939 publishing stories about superheroes before switching to their more commonly known stories about teenagers like Archie, Jugghead, Betty, Veronica, and Reggie. Archie Comics is the company's longest running series dating back to 1942. Some of their characters have been remade into television or films like Sabrina the Teenage Witch and Josie and the Pussycats.

The earliest known comic book is called The Adventures of Obadiah Oldbuck. Originally published in several languages in Europe in 1837, among them an English version designed for Britain in 1941. A year later it was that version reprinted in New York on Sept. 14, 1842 for Americans, making it the first comic book printed in America. Odadiah Oldbuck is 40 pages long and measured 8 ½" x 11". The book was side stitched, and inside there were 6 to 12 panels per page. No word balloons, but there is text under the panels to describe the story. A copy of it was discovered in Oakland, California in 1998.