Child Development in the Digital Age

This guide examines how child development is affected by the digital age. 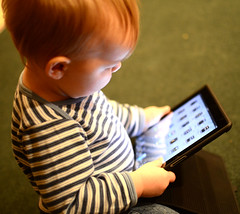 Babies today are born into a world of digital devices. Parents are trying to navigate this new reality, specifically figuring out what role these gadgets should play in the lives of their young children. This is no small task given that parents are bombarded with a lot of conflicting advice, much of which is ideological and not based on science.

Media consumption and screen time are on the rise. This has especially serious ramifications for children. With impressionable brains that are still developing, children often consume an excessive amount of media. A recent study found that the average elementary school aged child spent 7.5 hours daily using entertainment technology, and 75 percent of these children had a television in their bedrooms.

Technology offers many benefits to society, and its prevalence will only increase in the future. But when it comes to our children, finding a healthy balance is essential.

For many kids, green grass has been replaced with smartphone screens. In fact, by the age of eight, the average child will have spent one full year sitting in front of a screen.

This is in spite of official guidelines from the American Academy of Pediatrics, which recommends less than one hour per day of screen time for children between the ages of 2 and 5, and, for older children, “consistent limits” on screen time and prioritization of sleep, physical activity and other healthy behaviors over media use. Just last month the World Health Organization issued guidelines on the subject, stressing that children between the ages of 2 and 4 should have no more than one hour of screen time per day.

Preschool children exposed to at least two hours of screen time each day are roughly six times more likely to struggle with inattention and behavior problems, compared to peers who used screens for 30 minutes or less each day. This finding comes from a recent study published by Plos One that concludes children exposed to two or more hours of daily screen time are almost eight times more likely to meet the criteria for attention deficit disorder.

The study found that structured physical activity could significantly offset the risks associated with screen time. Behavioral issues were less common in children who participated in weekly organized sports for at least two hours.

Researchers suggested that pre-school may be a critical period for educating parents about limiting screen-time and supporting physical activity.

Obesity is one of the most strongly proven outcomes of screen media exposure. Many studies find that children who spend more time watching or playing with screen media have greater body fatness and obesity than children who spend less time with screen media. Further, several randomized controlled trials of school curricula and family behavior change programs to reduce time spent on screens have reduced weight gain in children, demonstrating a cause-and-effect relationship. The evidence to date suggests that screen media exposure leads to obesity in children and adolescents via three main mechanisms:

Children and teens who experience social anxiety — feeling discomfort or distress in social situations — or who are socially incompetent are at particularly high risk for developing dependence on electronic media. This is true whether the preferred activity is surfing the Internet, video gaming, or texting and social media use on a smartphone.1-3

The more a child hides behind a screen, the more socially awkward he or she becomes, creating a self-perpetuating cycle. In contrast, a shy child who continually works at overcoming social anxiety is likely to overcome it.

In the past, the strong desire to belong to a social group during

adolescence helped override resistance to social interaction, which would lessen over time simply due to practice. Nowadays, socially anxious or awkward children and teens aren’t forced to practice face-to-face and eye-to-eye interaction because some of their social needs are met online.

Thus, in socially anxious children, the ability to tolerate the physical presence of others never builds, and “walls” are erected instead to keep the child feeling safe. An adolescent with somewhat poor social skills in high school can easily become reclusive as a young adult, spending more and more hours online and less and less time interacting in real life.

But what about younger kids — how do screens stunt or disrupt social development in them? In school-age children, social impairment related to electronic screen syndrome (ESS) can manifest as poor sportsmanship when playing games, acting bossy or controlling, or being super competitive. (It doesn’t help that many video games reward competitiveness.) Kids with ESS often have a low frustration tolerance that results in meltdowns and a tendency to blame everyone but themselves. They may also hold grudges or attribute hostile motives to others where there are none, such as assuming a peer purposely bumped into them. All of these behaviors drive other children away.

Because social skills and mood regulation are dependent on good frontal lobe function, children with ESS often act much younger than their years, and they may be teased, bullied, or ostracized because of outbursts. Aside from the negative impact of screen-time on the brain's frontal lobe, lack of eye contact and face to face interaction, this dynamic occurs because screen activities tend to create a false experience of ease and success: electronic media offers immediate gratification, endless (and effortless) stimulation and entertainment, the ability to control one’s environment or one’s image, and the opportunity to be a hero — features that don’t reflect how things work in the real world.

.In short, screen-time makes children less able to tolerate disappointment and boredom, more entitled, and less willing to work — whether it be for school, at a job, or to improve a relationship. Is this really what we want for our children?

Screen time is not all bad for your kids. They can learn a ton from video games. And when parents and children are watching or playing together, kids are internalizing important social skills. Being intentional about the messages you send to your kids about media is a missing link in most parenting strategies.

In the 1980s, researchers at the Children’s Television Network discovered that kids learned more from Sesame Street when they watched the show alongside their parents. They called it “coviewing.” Most experts agreed that coviewing was unquestionably better than placing kids in front of the TV as a babysitter. For example, the Center on Media and Child Health explains that coviewing reduces fear and aggression, while increasing learning and discussion.

Most parenting wisdom continues to portray television as an evil mind-rotting demon. The fear of ‘screen time’ is so deeply ingrained in our collective imagination that an irrational opposition between outdoor play and media consumption is taken for granted. Many parents believe the choice is either/or: indoors or out. Trees, worms, and grass are pitted against transistors, cathode ray tubes, and Super Bowl commercials.

These days, in fact, most storytelling is interactive. We consume most of our media through internet connected devices. And technology is so adept at providing ‘adaptive feedback’ that it proves to be an exceptionally effective teaching tool. In fact, a recent SRI study shows that game based learning can boost cognitive learning for students sitting on the median by 12%.

Interactive learning games are fantastic. You’ll be amazed at what they can teach your kids. But remember, they still work best when parents and children play together. This is the new coviewing. Researches call it JME: Joint Media Engagement.

What does screen time look like in your household? How does your family practice joint media engagement?

Families should ask four questions to examine the time it is spending in front of screens:

Electronic Screen Syndrome (ESS), is the result of over exposure to screens in the forms of video game systems, tablets, and smart phones.  Electronics can overstimulate and deregulate a child’s nervous system.  The added overstimulation and stress cause children to have issues with mood, focus, sleep, and behavior.

What Behaviors are Associated with ESS?