This guide can be used to learn more about the issue of human trafficking and to access resources related to this topic. 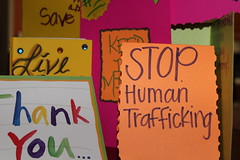 What is Human Trafficking?

Human Trafficking is the trade of persons for some purpose, usually criminal. Persons are trafficked primarily for sexual exploitation, labor, or as organ donors.

Americans generally tend to think that human trafficking is a crime that occurs in other countries, to foreigners who should have known better, or to those who brought it upon themselves. These assumptions are misconceptions; trafficking happens here in the United States to U.S. citizens (USC), and in every state in the nation. While foreigners who arrive in the U.S. legally and illegally are susceptible to human trafficking situations, U.S. citizens too fall victim to this crime at an alarming rate. Without regard to nationality of victims and with greed as their motivation, traffickers seek to exploit those who are most vulnerable – the young, the desperate, and the easily manipulated.

When trafficking is mentioned, Americans often visualize a foreign female who was deceived upon arriving in the U.S. and finds herself being sexually exploited. They do not imagine a USC child or adult who was kidnapped or lured from home and is prostituted at a local truck stop. Sadly, Americans tend to refer to USC trafficking victims as anything but victims. They are referred to as criminals, prostitutes, child prostitutes, runaways, throwaways, addicts, or juvenile delinquents. Traffickers are often referred to only as pimps, perpetrators, or criminals.

5 Facts About Sex Trafficking in the United States

1. It doesn’t just happen somewhere else.

Cases of human trafficking in the United States have been reported in all 50 states, Washington D.C., and all United States territories.

Victims of human trafficking can be children or adults, male or female, come from all backgrounds, and economic levels. Children as young as 9 can be targeted for exploitation.

3. It’s about power and control.

When it comes to children getting pulled into trafficking, perpetrators are looking for vulnerable children that they can easily control and manipulate. Lonely kids who don’t have a good relationship with friends or family are prime targets.

4. Americans are the largest producers of pornography in the world.

We’re also the biggest consumers. Both the production and consumption of pornography can feed into the demand for sex trafficking in the United States.

5. It isn’t just male strangers who are perpetrators.

Human trafficking is a multi-billion dollar enterprise, and it’s one of the fastest-growing illicit industries in the world.

Here’s a look at five of the countries that are classified among the worst human trafficking offenders:

1. Russia recently expanded bilateral agreements with North Korea that allow for labor camps and “slave-like conditions” for workers within Russian borders. About 20,000 workers from North Korea are sent to Russia each year.

2. China continues human trafficking and ongoing state-sponsored forced labor despite formal announcements that the practice had been stopped. Demographic challenges created by the country’s one-child policy have led Chinese men to find wives through sex trafficking.

3. Iran's government “continued to punish trafficking victims for unlawful acts" committed as a direct result of being subjected to human trafficking, such as adultery, prostitution, and illegal immigration,” some of which are punishable by death, according to the report. Migrants, particularly those from Afghanistan, are coerced into combat roles in Syria, and children as young as 3 years old work as street beggars under the threat of physical and sexual abuse.

4. In Belarus, forced and compulsory labor are used as punishment for various offenses in, including government criticism and failure of unemployed people to pay a fine. About 7,000 people suffering from alcoholism or drug dependencies are held in “medical labor centers” with an obligation to work

5. In Venezuela sex trafficking and child sex tourism are common, particularly among women lured from poorer regions to tourism hubs. Officials reported an increase of sex trafficking in the informal mining sector, but the government did not report any investigations into human trafficking or any protection efforts for victims.

International human trafficking, which is the “second largest criminal industry in the world." It occurs when people are moved across borders, with or without their consent, and then forced to engage in labor, sex or some other form of servitude and are denied the right to self-determination and often cannot escape.

Although statistics related to international trafficking are difficult to obtain or are unavailable due to the clandestine nature of the act, the U.S. State Department estimates that 800,000 people are trafficked worldwide across international borders annually.

Trafficking may be on the rise: as the global demand for labor decreases due to the worldwide economic recession, individuals from impoverished regions find themselves in dire situations and are willing to take greater risks and desperate for any work.