This guide provides suggested resources and other information for beginning research on Mental Health issues. 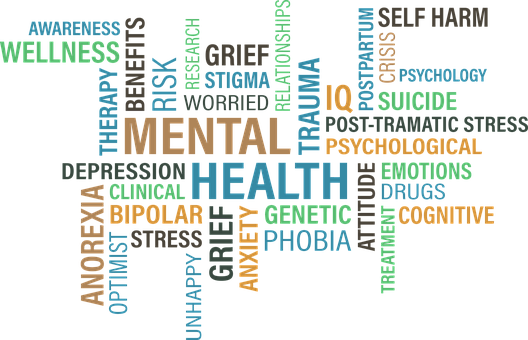 Mental health is the foundation for emotions, thinking, communication, learning, resilience and self-esteem. Mental health is also key to relationships, personal and emotional well-being and contributing to community or society.

Many people who have a mental illness do not want to talk about it. But mental illness is nothing to be ashamed of! It is a medical condition, just like heart disease or diabetes. And mental health conditions are treatable. We are continually expanding our understanding of how the human brain works, and treatments are available to help people successfully manage mental health conditions.

Mental illness does not discriminate; it can affect anyone regardless of your age, gender, geography, income, social status, race/ethnicity, religion/spirituality, sexual orientation, background or other aspect of cultural identity. While mental illness can occur at any age, three-fourths of all mental illness begins by age 24.

Mental illnesses take many forms. Some are mild and only interfere in limited ways with daily life, such as certain phobias (abnormal fears). Other mental health conditions are so severe that a person may need care in a hospital.

Mental health disorders are among the most burdensome health concerns in the United States. Nearly 1 in 5 US adults aged 18 or older (18.3% or 44.7 million people) reported any mental illness in 2016.2 In addition, 71% of adults reported at least one symptom of stress, such as a headache or feeling overwhelmed or anxious.

Many people with mental health disorders also need care for other physical health conditions, including heart disease, diabetes, respiratory illness, and disorders that affect muscles, bones, and joints.The costs for treating people with both mental health disorders and other physical conditions are 2 to 3 times higher than for those without co-occurring illnesses.9By combining medical and behavioral health care services, the United States could save $37.6 billion to $67.8 billion a year.

About 63% of Americans are part of the US labor force.The workplace can be a key location for activities designed to improve well-being among adults. Workplace wellness programs can identify those at risk and connect them to treatment and put in place supports to help people reduce and manage stress. By addressing mental health issues in the workplace, employers can reduce health care costs for their businesses and employees.

Mental illnesses such as depression are associated with higher rates of disability and unemployment.

Even after taking other health risks—like smoking and obesity—into account, employees at high risk of depression had the highest health care costs during the 3 years after an initial health risk assessment.

A healthy mind is as important to a child’s development as a healthy body. One in five children have a diagnosable mental health condition, yet only 20% of those children receive the help they need. Mental health plays a critical role in shaping a child’s social, emotional and cognitive development.

The world can be a scary place. Anxiety and depression in teens is on the rise. Understanding and caring for our children’s mental health while they are young can help them realize their potential and reduce the risk of developing mental health problems.Many children are significantly impacted not only by world events and catastrophes, but also by daily occurrences and life circumstances. The start of school, the news on television, the influx of social media, the death of a friend or grandparent, natural disasters, contentious politics, or even just a bad day at school can affect our children more than we realize.In these unsettling times, it is more important than ever to know how to talk to your children about difficult topics and engage with them in a way that promotes positive mental health.

Research shows that children’s brains develop well into their mid-20’s. It is important to know that children’s emotions and behaviors CAN BE signs that they are struggling with their mental health, which can happen for a multitude of reasons or for no apparent reason at all.

In fact, some thoughts, feelings, and behaviors can actually be symptoms of diagnosable emotional, mental, or behavioral health disorders that warrant intervention and treatment by a professional. The problem is that it can be difficult to know the difference between signs of concern and typical phases or stages of development. While not all mental health struggles will lead to a diagnosis, that should not be a deterrent to seek help and treatment. When a child shows symptoms of a physical illness, whether it is a sore throat or a broken arm, parents do not hesitate to seek treatment. In the same way, parents should not be ashamed to seek treatment when symptoms of mental health struggles arise.

Resilience, a component of emotional intelligence, can foster good mental health. The key is to help children build and increase their resilience as they encounter challenges in life by helping them acknowledge and move through difficult and painful feelings and sensations. Science now shows that emotional intelligence enhances young minds and their capacity to integrate skills, attitudes, and behaviors effectively and ethically into daily tasks and challenges. While we may think we are protecting our children by avoiding unpleasant subjects, teaching them emotional intelligence, how to recognize, understand and deal with their emotions,  builds resilience and is one of the most important skill sets needed for lifelong happiness and success.

According to Thomas Fagan, PhD, professor emeritus at Nova Southeastern University in Florida and a former administrator for the Federal Bureau of Prisons, despite improvements over the past 30 years, the correctional system continues to struggle to meet the vast needs of the increasing number of inmates with mental health conditions.

About 37 percent of people in prison have a history of mental health problems, according to a 2017 report from the U.S. Department of Justice. More than 24 percent have been previously diagnosed with major depressive order, 17 percent with bipolar disorder, 13 percent with a personality disorder and 12 percent with post-traumatic stress disorder. The numbers are even higher for people in jail, where one-third have been previously diagnosed with major depressive disorder and almost one-quarter with bipolar disorder.

Once in jail, many individuals don't receive the treatment they need and end up getting worse, not better. They stay longer than their counterparts without mental illness. They are at risk of victimization and often their mental health conditions get worse.

“We lock up people with mental health problems when we should really be treating these people in the community,” says Fagan. “In the absence of that, prisons and jails become de facto treatment centers" and as a result, psychologists, psychiatrists and social workers have become essential mental health providers in correctional settings.

After leaving jail, the majority of inmates no longer have access to needed healthcare and benefits. A criminal record often makes it hard for individuals to get a job or housing. Many individuals, especially without access to mental health services and supports, wind up homeless, in emergency rooms and often re-arrested. At least 83% of jail inmates with a mental illness did not have access to needed treatment.

Jailing people with mental illness creates huge burdens on law enforcement, corrections and state and local budgets. It does not protect public safety. And people who could be helped are being ignored.

Hopefully, by implementing various types of prison reform measures, criminal justice leaders, county and state leaders and mental health professionals we can help people with mental illness get the support and services they need to stay out of jail.

When family relationships are stable and supportive, a person suffering from mental health issues or disorders may be more responsive to treatment. Companionship, emotional support and often even economic support can have a positive impact on someone coping with a mental health problem.

While some who suffer from mental health issues may require intense familial support, others may simply need help with transportation to get to treatment or the day-to-day companionship that most people require in times of need.

Most of the care that mental health sufferers often rely on is from family, so when family members deny this support, the recovery process can be negatively affected.

If your family is impacting your mental health in a negative way, you may wish to make an appointment with a therapist or counselor in order to get help for your symptoms and learn strategies for coping with family problems.

The state of your mental health is not typically a choice, but you can choose to seek help. If your family is not supportive, it's important to talk to your healthcare provider who can help you understand your options so you can get the vital help you need.

The coronavirus disease 2019 (COVID-19) pandemic may be stressful for people. Fear and anxiety about a new disease and what could happen can be overwhelming and cause strong emotions in adults and children. Public health actions, such as social distancing, can make people feel isolated and lonely and can increase stress and anxiety. However, these actions are necessary to reduce the spread of COVID-19. Coping with stress in a healthy way will make you, the people you care about, and your community stronger.

Stress during an infectious disease outbreak can sometimes cause the following:

You may experience increased stress during this pandemic. Fear and anxiety can be overwhelming and cause strong emotions.

Get immediate help in a crisis:

Find a health care provider or treatment for substance use disorder and mental health if needed.