An overview of ocean pollution and its affects in our world. 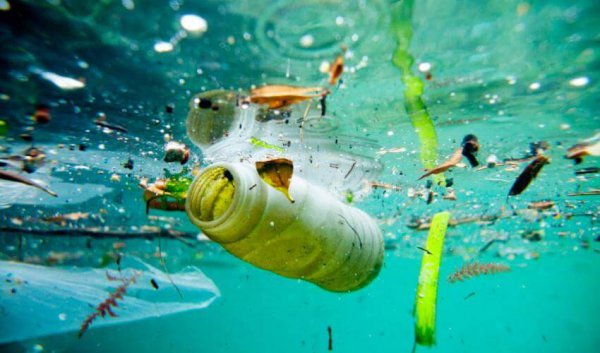 Pollution is defined as the process of introducing harmful or poisonous substances into the natural environment. Ocean pollution is therefore defined as the introduction of toxic materials such as plastic, oil, chemicals, agricultural waste, and industrial waste into the ocean waters.

Chemical contamination, or nutrient pollution, is concerning for health, environmental, and economic reasons. This type of pollution occurs when human activities, notably the use of fertilizer on farms, lead to the runoff f of chemicals into waterways that ultimately flow into the ocean. The increased concentration of chemicals, such as nitrogen and phosphorus, in the coastal ocean promotes the growth of algal blooms, which can be toxic to wildlife and harmful to humans. The negative effects on health and the environment caused by algal blooms  hurt local fishing and tourism industries.

Marine trash encompasses all manufactured products—most of them plastic—that end up in the ocean.  Littering, storm winds, and poor waste management all contribute to the accumulation of this debris, 80 percent of which comes from sources on land. Common types of marine debris include various plastic items like shopping bags and beverage bottles, along with cigarette butts, bottle caps, food wrappers, and fishing gear. Plastic waste is particularly problematic as a pollutant because it is so long-lasting. Plastic items can take hundreds of years to decompose.

Nonetheless, many countries are taking action. According to a 2018 report from the United Nations, more than sixty countries have enacted regulations to limit or ban the use of disposable plastic items.

Toxins are one of the very dangerous marine pollution’s that occurs due to various toxins accumulated the oceans. Toxins such as DDT, Furan, Radioactive waste, pesticides, PCB, TBT, Phenol etc. neither gets dissolve nor gets fragmented and hence cause dangerous effects to marine life.

The continuous growth in the usage of plastic has covered the oceans badly across the world. The rate of plastic dumped in the oceans is increasing simultaneously with the increase of human population. The plastic dumps are affecting the marine life so badly that the situation has become alarming for the marine ecosystem.

According to the National Oceanographic and Atmospheric Administration, plastic debris kills an estimated 100,000 marine mammals annually, as well as millions of birds and fish. Plastic litter can be a physical danger to wildlife that becomes entangled in plastic debris like plastic bags, or when wildlife consumes plastic items like bottle caps.

Even more challenging is the plastic waste we cannot see. The physical actions of sun, wind, and water also plastic into tiny pieces, known as microplastics, that are not visible to the naked eye. Marine birds, fish, and sea turtles then mistake these microplastics for plankton or other native prey. This plastic diet poses an ongoing threat due to its toxicity and because it gives wildlife a false sense of fullness, ultimately resulting in starvation.

Toxicity in the Food Chain

In the marine environment, plastic absorbs persistent organic pollutants and becomes increasingly toxic over time. Plastic packaging contain a wide range of additives, such as water repellents, flame retardants, stiffeners like bisphenol A (BPA), and softeners called phthalates that can leach into the surroundings. These chemicals concentrate in marine food chains, and are then stored in the fatty tissues of the creatures that consume them. Toxins continue to bioaccumulate up the food chain, increasing in concentration with each predator. While microplastics haven't yet been found in seafood, scientists are concerned about the human-health impacts of marine plastics. As microplastics continue to fragment into even-smaller nanoplastics, they can penetrate cells and move into the tissues and organs of fish.

To begin solving the problems of marine litter, we need to quickly move away from disposable petroleum-based plastics. Individuals, organizations, governments, and communities can pledge to eliminate single-use plastics and use reusable or compostable alternatives.

Another pathway of pollution occurs through the atmosphere. Wind-blown dust and debris, including plastic bags, are blown seaward from landfills and other areas. Dust from the Sahara moving around the southern periphery of the subtropical ridge moves into the Caribbean and Florida during the warm season as the ridge builds and moves northward through the subtropical Atlantic. Dust can also be attributed to a global transport from the Gobi and Taklamakan deserts across Korea, Japan, and the Northern Pacific to the Hawaiian Islands.

What is Atmospheric Pollution? - GeeksforGeeks

It’s an invisible threat, but noise pollution is a major — and often deadly — menace to ocean wildlife. Just as there’s hardly a mountaintop free from the roar of airplanes overhead, there’s virtually no place in the world’s oceans where human sounds aren’t detectable. The loudest and most disruptive anthropogenic ocean sounds come from military sonar, oil exploration and industrial shipping, and the Center is working to protect our marine life from each of these threats.

Many marine organisms rely on their ability to hear for their survival. Sound is the most efficient means of communication underwater and is the primary way that many marine species gather and understand information about their environment. Many aquatic animals use sound to find prey, locate mates and offspring, avoid predators, guide their navigation and locate habitat, and listen and communicate with each other.

Over the last century, human activities such as shipping, recreational boating, and energy exploration have increased along our coasts, offshore, and deep ocean environments. Noise from these activities travel long distances underwater, leading to increases and changes in ocean noise levels.

Rising noise levels can negatively impact ocean animals and ecosystems. These higher noise levels can reduce the ability of animals to communicate with potential mates, other group members, their offspring, or feeding partners. Noise can also reduce an ocean animal's ability to hear environmental cues that are vital for survival, including those key to avoiding predators, finding food, and navigating to preferred habitats.

The ocean is far from a “silent world.” Sound waves travel farther and faster in the sea’s dark depths than they do in the air, and many marine mammals like whales and dolphins, in addition to fish and other sea creatures, rely on communication by sound to find food, mate, and navigate. But an increasing barrage of human-generated ocean noise pollution is altering the underwater acoustic landscape, harming—and even killing—marine species worldwide.

Simply put, the ocean cannot continue to thrive as a dump site for people.  While the state of the ocean’s pollution may not come as any sort of surprised to many people, the cold hard facts might:

Fact 1: Plastic is the most common element that is found in the ocean. It is harmful for the environment as it does not get break down easily and is often considered as food by marine animals.

Fact 2: The biggest source of pollution in the ocean is directly from land based sources, such as oil, dirt, septic tanks, farms, ranches, motor vehicles, among larger sources. Thousands of tons of waste and trash are dumped into the ocean on a daily basis.

Fact 4: Even though much the trash and waste dumped into the ocean is released hundreds of miles away from land, it still washes up on beaches and coastal areas, and affects everything in between. Every marine animal is affected by man-made chemicals released in the water.

Fact 5: There is an island of garbage twice the size of Texas inside the Pacific Ocean: the North Pacific Gyre off the coast of California is the largest oceanic garbage site in the entire world. There, the number of floating plastic pieces outnumbers total marine life six to one in the immediate vicinity.

Fact 6: Oil is the fastest source of deterioration to the ocean, being far more harmful than trash and waste. However, only a small percentage of oil (around 12%) dumped in the ocean comes as a result of actual oil spills. Most oil causing harm in the ocean is a result of drainage from land. Oil spills suffocate marine life to death, and leads to behavioral changes and a breakdown in thermal insulation to those that do survive. It essentially changes the entire ecosystem of an affected area, such as a long coastline or deep ocean.

Fact 8: Plastic debris can absorb toxic chemicals from ocean pollution, therefore poisoning whatever eats it. In fact, plastic pollution is one of the most serious threats to the ocean. Plastic does not degrade; instead, it breaks down into progressively smaller pieces, but never disappears. They then attract more debris.  It poses a significant health threat to the various sea creatures, and to the entire marine ecosystem. Overall, plastic is the number one source of pollution in the ocean.

Fact 9: Not all sources of contamination in the ocean come from just oil, trash and solid wastes. The dumping of radioactive waste from nuclear reactors, industrial race (such as heavy metals and acids), and drained sewage are also heavy contributors to pollution. The truth is that billions of tons of litter end up in the ocean each year, and it is substantially more than the 250 million tons of trash generated. This has led to a gradual loss in marine life and an increase in the number of endangered species. Littering causes pollution in the ocean, which also causes a substantial loss of life beneath the seas.

Fact 10: Sewage leads to the decomposition of organic matter that in turn leads to a change in biodiversity. Even if the ocean’s ecosystem isn’t destroyed entirely, it is still changed drastically, and usually not for the better.

Fact 11: Fertilizer runoff creates eutrophication that flourishes algal bloom (rapid increase or accumulation in the population of algae in aquatic systems) which depletes the oxygen content in the water that affects marine life.

Fact 13: People get contaminated easily by eating contaminated seafood that can cause serious health problems, from cancer to damage to immune system.

Fact 14: The garbage like plastic bottles, aluminium cans, shoes, packaging material – if not disposed correctly, can reach the sea and the same garbage can again reach the sea shore where it pollutes beaches and affects local tourism industry.

Fact 15: Salty water of ocean has the capability to move pollutants from the ocean into coastal freshwater making wells and groundwater contaminated.

Fact 16: Chemicals from industries and mines can also enter ocean through land based activities. They can seep through soil, water or land either during their manufacture, use or accidental leaks. From soil, water or land, they can enter into ocean currents and can travel longer distances.

Fact 17: As 70% of the earth is covered with water, people actually assumed that all pollutants would be diluted and get disappeared. But in reality, they have not disappeared and their effects can be easily seen as they have entered the food chain.

Fact 18: Until 1970’s, the chemicals and garbage was deliberately dumped into the oceans and became as common practice for disposing everything including pesticides and radioactive waste, assuming that it would get dissolved to safe levels.

Fact 19: In several parts of the world including Gulf of Mexico and the Baltic Sea, Eutrophication has created enormous dead zones.

Fact 20: Till today, in many parts of the world, sewage water is discharged in the ocean – untreated or under-treated. This can cause serious effect on marine and human life and can also lead to eutrophication.