This guide will serve as a starting point for those wishing to conduct research on the topic of police reform. 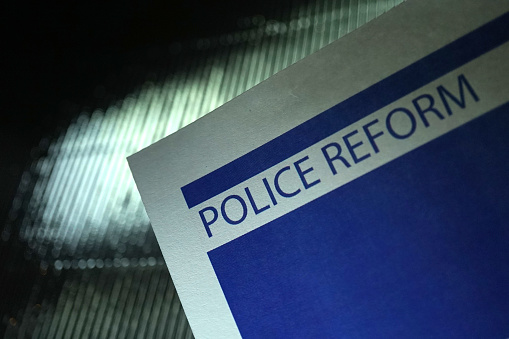 What is Meant by "Police Reform?"

During the nationwide protests that followed the killing of George Floyd, protesters, politicians, religious leaders, and other groups called for police reform in the United States. This has led to laws, proposals, and public directives at all levels of government to address police misconduct and systemic racial bias, as well as police brutality in the United States. Some of the common reforms involve bans on chokeholds and no-knock warrants, and improvements to police data collection procedures.

Calls to “defund the police” have gained momentum in progressive circles across the country. Reallocating some of the police’s funds to other community resources is seen by some as critical in the movement against police brutality.

But what does “defunding the police” actually mean? Here’s what some activists and legal organizations are calling for, and why they say it would help.

Activists would like cities to stop increasing police budgets each year, and for large percentages of the budgets to be diverted to other causes. Exactly how much local groups believe could be reallocated varies by locality and each individual city’s current budget.

Activists pushing to defund police departments are advocating for the money to be invested in other types of programs in marginalized communities, like alternative emergency response services. Rather than dial 911 and have a police officer respond to an overdose, for example, a medical professional would respond.

Those in favor of reform say this could prevent the use of unnecessary force and violence, and potentially death, from police first responders who are not necessarily trained to handle social issues including domestic violence, substance abuse, homelessness or a mental health crisis effectively. Instead, community workers and others trained in de-escalation techniques would respond.

Ultimately, reducing police budgets is largely a local government issue. How or if cities will reallocate funds remains to be seen.

The House and the Senate have competing reform bills.

Key elements of competing plans to reform policing in the U.S. offered by Democrats and Republicans in Congress:

One of the main blockades to law enforcement reform is police unions.

Police unions negotiate with cities over pay and the protection of their officers. Though police unions were banned until 1838 due to concerns about armed government agents organizing, today they act as one of the most powerful lobbying groups in the nation.

Police unions allow departments to strong-arm negotiations with city governments and steamroll legislative policies with unchecked lobbying. And they protect their own repeatedly.

Between 900 to 1,000 people are shot and killed by police in the United States every year. Since 2005, 98 nonfederal officers have been arrested for on-duty shootings; as of 2019, only 35 have been convicted. Those convicted are rarely found guilty of murder, but of lesser indictments like manslaughter, which carry lighter sentences.

Before he knelt on Floyd’s neck, Officer Derek Chauvin was the subject of 18 complaints in his 19 years in the police force. He was reprimanded twice—both times for incidents involving shooting civilians. Chauvin has shot three people in his time on the force, killing one. Police unions use their negotiating power to appeal judicial rulings and city policies that would see officers like Chauvin reprimanded, fired, or arrested. Under the Minneapolis Police Departments collective bargaining contract, any disciplinary records that did not result in punishment must be removed from an officer’s file. Officers who are fired for misconduct are still entitled to an appeals process that often results in reinstatement.

There are real, violent implications to the barriers unions raise: a 2018 study by the University of Oxford found a direct positive correlation between police violence and misconduct in U.S. cities and the “robustness of protections afforded to police through union mechanisms.” A 2019 study by the University of Chicago discovered a 40 percent increase in cases of police violence in Florida following an expansion of collective-bargaining rights to police departments.

Calling for the arrest and proper punishment of individual officers after every incident of brutality is an exhausting process that will only lead to temporary justice. The reform and eventual dismantling of national police unions is the only way to remove major barriers to the institutional change policing in America requires.

Alternative policing programs can, and do, work. In the meantime, as broader reforms are sought, police unions must first be dismantled. So long as police unions—and the problematic, deadly barriers they erect—exist, officers will continue not to face real accountability for acts of violence. Reform is possible. We just have to be brave enough to pursue it.

Transformation of police departments, their role and relationship to our communities requires a change in culture, accountability, training, policies and practices. It also requires strong leadership and transparency. Without organizing our communities and building power nothing will change.

Below are five issues that should be part of any effort to reform policing in local communities. This is not an exhaustive list but it’s a start.

The lack of trust for law enforcement that exists in so many communities is due in part to lack of accountability and transparency. Too many failures to indict officers and too many acquittals have left communities feeling that there is no justice. When someone is killed and no one is held responsible it not leaves people of color feeling vulnerable. To build trust, there must be consequences and the public must have information.

a. Accountability: Police departments should not investigate themselves. Nor should justice depend on prosecutors who rely on local law enforcement for evidence in cases they bring. Instead, accountability systems should be directed by the communities that police departments are supposed to protect and serve.

b. Transparency: Improved data collection and reporting practices are necessary to expose interactions with law enforcement and as a tool of accountability. There is no federal database tracking the number of people killed by law enforcement, use of force, or stop-and-frisks. Many local departments do not keep this important data either. Departments should collect and release this data to the public annually. The Center for Policing Equity is developing a database that 50 police departments have already agreed to use.

2. Excessive Use of Force

Data indicates that Black men are 21 times as likely as White men to be killed by law enforcement. Black women, Transgender people, Native American and Latinx communities are also disproportionately killed or assaulted by law enforcement. Racial disparities in use of force cannot be explained by disparities in crime rates. So what can you do? Demand that your local police department: (a) create strong community-centered accountability systems, (b) release and improve use of force policies, (c) release data on all law enforcement activities, and (d) improve training.

a. Use of Force Policies: There are no national standards on use of force, but some police departments have adopted policies intended to reduce excessive force. Such policies prohibit acts such as neck holds, head strikes with a hard object, and using force against persons in handcuffs.

b. Improved Training: Law enforcement should be required to go through racial bias training in addition to building skills in problem-solving, conflict mediation, and de-escalation tactics.

Eric Garner was allegedly stopped for selling loose cigarettes. Alton Sterling was allegedly stopped for selling CDs. The Department of Justice concluded that the Ferguson Police Department overwhelmingly fined and arrested people, particularly Black people, multiple times for minor municipal code violations. These practices stem from the “broken windows” theory which asserts that addressing low-level “disorder” issues, such as broken windows, is necessary to prevent more serious crimes. However, many criminal justice experts have concluded that broken windows theory is actually just a form of “informal social control.” The practices that stem from broken windows theory, such as stop-and-frisk, disproportionately affect Black and Brown communities and there is no evidence that they are effective at reducing crime. What can you do? Read the recommendations offered by the Department of Justice in Section V of the Ferguson Investigation and talk to your neighbors about whether any of the recommendations are right for your community. Some recommendations include (a) the prohibition of ticketing and arrest quotas and (b) supervisory approval before someone can be arrested for “failure to comply,” “resisting arrest,” “disorderly conduct,” or “disturbing the peace.”

The majority of law enforcement training emphasizes technical and tactical aspects of policing. There is an insufficient amount of training focused on anti-racism, implicit bias, mental illness, age-appropriate responses, problem-solving, mediation or cultural competency. So, it is not surprising that many law enforcement officers are primed to perceive Black people as criminals and respond based on that stereotype. Recently, the Department of Justice announced that it would start training all of its officers on implicit bias. Is your police department conducting such training?

These are just a few issues to get started on. Other issues to target include constant surveillance and targeting of Muslim, Black and Latinx communities; immigration enforcement by local police; undercover agents entrapping queer communities of color; and, the role of police in schools. There are more transformative changes that can be done to end the over-policing of our communities.